THE CRUSADES
THE ALMORAVIDS

Welcome to THE CRUSADES THE ALMORAVIDS and ANDALUSIAN CASTLE all part of the upcoming series of EL CID AND THE RECONQUISTA. Thre castle will be due in 2021.. Hopefully many of you remember the wonderful Charlton Heston Movie "El CID", if not time to find it again. We found it on You Tube, forgot it was made in 1961. I am hoping these will start to be be available before Christmas, and it is likely to disappear rather fast. A lot to look forward to, could be a very happy Christmas. 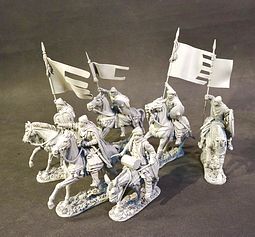 The Almoravids, also known as the Murabits, were a fundamentalist Islamic movement of the 11th and 12th Centuries. Founded by Ibn Yasin, in southern Morocco, they combined devotion to Islam with a fierce military tradition, and a desire to conquer. In 1070, the Almoravids established their capital city at Marrakesh, which at the time, was little more than a mosque in the desert surrounded by the tents of the faithful. 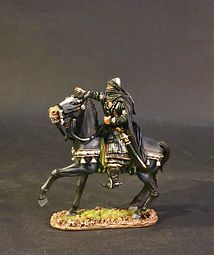 These years were, however the high point of the Almoravid expansion into Spain. Despite success on the battlefield they failed to reconquer much land from the Christians. By the mid 12th Century the Almoravid empire began to be replaced by a new North African power , the Almohads.

YUSUF IBN TASHFIN, who is better known to westerners as "Ben Yusuf", was undoubtedly the greatest leader of the Almoravid movement. A pious and compassionate man, as well as a ruthless and charismatic leader in battle. He rose to prominence as the commander of the northern part of the Almoravid empire in the 1070's and became sole leader of the movement upon the death of Abu Bakr in 1087. Having conquered all of morocco, he turned his attention to Spain, and invaded in 1086. He led his army to a great victory over the Christians at the battle of Zalaca in October 1086. By 1089 he had decided to depose the Andalusian Taifa kings, and take their kingdoms for the Almoravid empire. Following the fall of the Taifa kings, Yusuf concentrated his forces against the Christians, in particular the outpost castle of Aledo near Granada, and Valencia, which El Cid had conquered in 1094. Aledo finally fell in 1091, but Valencia held out against all of Yusuf's attempts to retake it.

Yusuf was to outlive the Cid (who died in 1099) and finally saw Valencia fall into Almoravid hands in the spring of 1102.

Yusuf was to eventually die in 1106, and was succeeded by one of his many sons, Ali Ibn Yusuf. 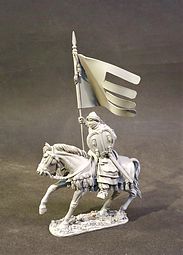 The Almoravid army started as a confederation of Berber tribes, who were motivated religious warriors, trained to stand shoulder to shoulder and accept casualties in the cause of islam. Spearman and archers were the main force of the Almoravid army, and were especially effective against enemy cavalry, and Christian knights. 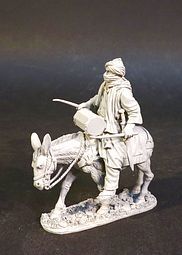 Cavalry were less common, and were mainly Berber light horsemen, armed with javelins and bows. They would have been the main mounted troops, but would have been little match against charging Christian knights. The skirmishing tactics became an important part of Spanish warfare, and the Berber tribe, called Zanata, eventually gave their name to it, "Jinete" (a Romanised corruption of Zanata) became the Spanish word for for a light horseman.

To compensate for the lack of heavy knights, Almoravid leaders had their own Hasham Guard cavalry, as well as using allied Andalusian Cavalry, and even Mercenary Christian knights.

THE BLACK GUARD AND ALMORAVID SPEARMEN 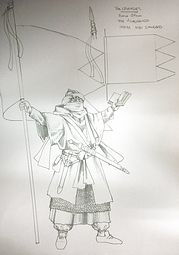 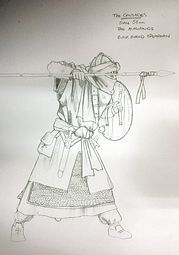 Probably the most characteristic feature of the Almoravid warrior was, his "litham" or face veil. The Almoravids were said to regard the mouth as unclean and refered to unveiled peoples as "the fly-mouthed". 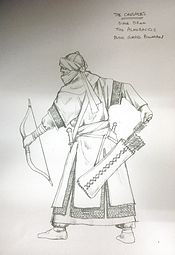 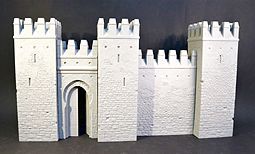 The impact and early significance of castles in Spain can be measured by the fact that the noun "castle" (from the Latin castella meaning "castles") forms the origin of the name of Spain's historically most powerful kingdom: Castile. And the history of Castile - the land of castles - projects itself widely over the history of Spain,

Castles were not built only in response to hostility between Christians and Moors but also by Christian and Moorish rulers to control internal conflicts. They were also constructed by ambitious and rebellious nobles on both sides, especially in those areas far removed from immediate royal authority.

Villages and towns frequently established themselves around castles, creating hubs that provided work for the inhabitants. In times of hostility, those inhabitants could seek protection inside the castles. In return for protection, villagers often surrendered their freedom and became vassals of the lord of the castle, creating one of the most identifiable social structures associated with this period: feudalism (in general terms, a contract whereby a king or lord allowed a vassal to use his land in return for homage and service whenever called upon). However, in Spain, and more specifically in the medieval kingdoms of Castile, Leon, Navarre and Aragon, the feudal system never took firm root because of the need to encourage citizens to populate or repopulate lands on the borders with Muslim al-Andalus. Castles were built and existing towns strengthened as centres of resistance to the threat of Muslim expansionism. In return, monarchs or nobles offered willing citizens certain inducements/privileges (e.g. ownership of land, freedom from taxation, keeping the profits of war) for settling and defending frontier zones. These privileges  - legally recorded and known as fueros or charters -  differed from area to area, but in general they outlined both the obligations and freedoms of the settlers and protected them from servitude. 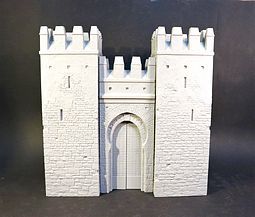 From an early date, the main defensive wall of Spanish, especially Muslim castles had square or rectangular towers. Christian fortresses were more likely to have semi circular towers, whose advantage was that they were better to deflect stones and arrows.

The square tower still prevailed in Moorish castles into the 13th and even 14th centuries.

The "horseshoe arch" was another characteristic of Muslim castles, with the double horseshoe "Gate of Justice" the main entrance of the Alhambra fortress being a magnificent example. 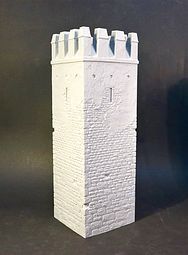 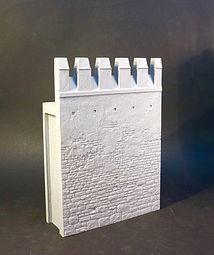 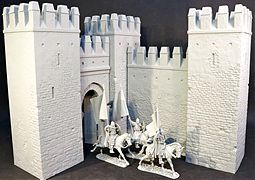 The castle will be available in 2021.

I cannot complete this news update without reference to another great movie from my youth, "he Longships". This 1964 movie starring Richard Widmark and Sidney Poitier, was loosely based on the Swedish novel, "The Long Ships" by Frans G. Bengtsson. The book follows the adventures of the Viking Rode Orm, (called "Red" for his hair and temper) and is well worth a read. The movie script revolves around the search for an immense golden bell, named the mother of Voices, by a group of Vikings and Moors. Which gives some interesting alternative display options for those collecting Vikings!