Welcome to the Second World War Future Release's. Featuring a magnificent Mustang, I am hoping it will be available before Christmas, and it likely to disappear rather fast. The crew you see, will be available mid 2021, so you have next Christmas sorted out as well. Before you ask no release date, just yet, but a lot to look forward to.

The P-51 Mustang fighter was manufactured in the United States during World War II (WWII). The first Mustang to come off assembly lines in California and Texas were P-51As. The P-51 was first used by the British Royal Air Force in 1942.

Starting in late 1943, the P-51B version was used by the U.S. Army Eight Air Force. Later in mid-1944, the P-51D version was introduced into the European theater. The P-51D was the most widely produced version of the Mustang during WWII and was easily recognized by its bubble top canopy and Rolls Royce Merlin engine.

The P-51D was equipped with six .50 caliber Browning machine guns holding a total compliment of 1880 rounds. The fighter also carried "zero rail" rockets under each wing and were equipped with bomb racks capable of carrying up to 1000 pounds of bombs. Because of its excellent range and maneuverability, the P-51 was primarily used as a long-range escort and as a ground attack fighter-bomber. 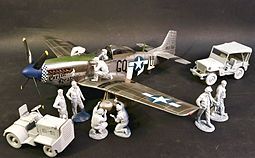 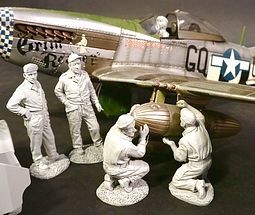 The Mustang was the first single engine fighter in Britain with enough fuel range to escort bombers to Germany and back. Luftwaffe Reichsmarshall Hermann Goring was quoted as saying after seeing the Mustang over Germany that "the war is lost."

In both the European and Pacific theaters, Mustang pilots shot down a total of 4,950 enemy aircraft, and 275 P-51 pilots achieved "Ace" status.

The jjDesigns model is of a P-51D named the "Grim Reaper." It was piloted by fighter ace Capt. Lowell Brueland.

Brueland had deployed to England in November 1943 and was assigned to the 355th Fighter Squadron, 354th Fighter Group, Ninth Army Air Force. 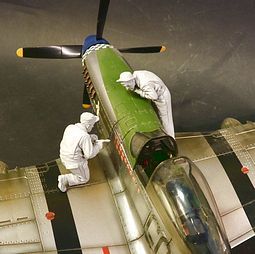 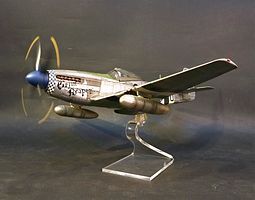 From 1943 to 1945, Brueland was credited with the destruction of 12.5 enemy aircraft in aerial combat. He eventually became commander of the 355th Fighter Squadron in May 1945,

Capt. Brueland was awarded the Distinguished Service Cross for gallantry in action on November 8, 1944. During a fighter sweep over the St. Lo area in Normandy, France in July 1944, Brueland and his formation of eight P-51 fighters engaged over 60 German fighters and fighter bombers. In the ensuing combat, Brueland shot down three enemy fighters and damaged a fourth. Brueland and his fighter group eventually caused enemy fighters to disperse and be driven off. In addition, German fighter bombers were forced to jettison their bombs, thus eliminating a threat to the Allied front.

Brueland later served in command roles during both the Korean War and Vietnam conflict. He retired from the Air Force on December 31, 1968. He died on July 2, 2012, and was later buried at Arlington National cemetery.

Although not a new series, the P51D Mustang is the first new plane produced by jjDesigns for over a year. The accompanying figures and vehicle accessories have only recently been completed and will not be available until the middle of next year.