And now For Something Different as Monty Python would say. An insight into the development of John's Figures.

When asked what I do for a living, my wife is quick to reply that.... "John just goes out to play every day!"

As lucky as I am that there is a great element of truth in that statement, there are also certain aspects of what I do that I have had to give some serious consideration. In this time of what seems to be an overindulgence in political correctness, I have certainly in the past as well as today had to consider the impact of what I do.

There is no way on a Monday morning, I am going to attempt to offer theories on the role of toy soldiers and toy soldier collecting in society today.

Instead I would like to illustrate how what we refer to as the "comic book", has influenced two series which I have produced in completely different ways.

I had been an avid comic book reader from an early age, starting with Asterix The Gaul, Tintin, and later the Commando comic books. For me playing with toy soldiers and reading, were important in that they simultaneously inspired dreams and stimulated the imagination, as well as raising questions about reality.

With 2004 being the 250th Anniversary of the start of the French and Indian War, and having worked and lived in Canada, it was not surprising that my first series would be about this conflict. The 1750's were so far removed from my reality that it was easy to only see the conflict through the world of "a boys own adventure!", with good guys, bad guys, heroes and heroines.

It is therefore easy to understand why the painting style for these first figures were based on flat bold colours, with heavy black lines. What I used to describe to the factory painters, as a "comic book style". 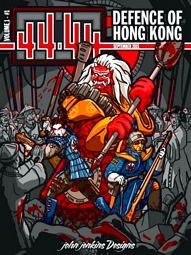 Where the 250th Anniversary of the French and Indian War was so far away in time, it was easy to place it in another world, and in a world of imagination. 1914 was a little closer to home, as my grandparents had fought in this "war to end all wars", and it was difficult to escape the harsh realities, with much of the conflict caught on that most realistic of mediums photography, and film.

As usual with a new period I had immersed myself in the history books, and visual references of the period, and of course had watched many of the most important movies about the war, such as "All Quiet on the Western Front", and "Paths of Glory".

I had been thinking about how to proceed with this period for a long time. I had already started planes and tanks of the period, which were fascinating in themselves, but hated the idea of producing khaki figures in a classic toy soldier poses, advancing, firing, "crossing no mans land " ........ being mowed down, by machine gun fire.

David Gauthier is a talented Graphic artist, and worked in sales for one of the Canadian dealers. He was always extremely knowledgeable and helpful, in discussing the historical subject matter, as well as being excellent with customer feedback. We discussed many of my ideas, and David often sent me some of his artwork based on some of the subjects we discussed. Below is the cover art for a futuristic range, (which will definitely not materialize!) 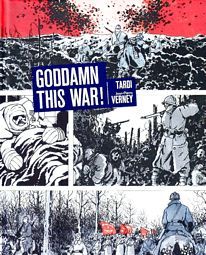 I mentioned to David how I was finding it difficult and almost impossible to find an avenue to tackle the first World War. It was then that David introduced me to the work of Jacques Tardi.

I certainly had not expected a return to comic books, or what I should now call Graphic Novels, as a major inspiration for how to proceed with A Great War series.

Tardi's work tells these horrific and fatalistic tales about ordinary French soldiers as men who have been messed around and dragged through the mud clearly unhappy to find themselves in a place, where there only wish is to stay alive for just one more hour, whose main desire is to return home, and for the war to be over. There are no good or bad guys, or heroes, but just a gigantic anonymous scream of agony.

Whilst the F+I war was pure boys own adventure stories, and for me was encapsulated perfectly in the comic book painting style, I felt that the same style of painting would be inappropriate for this WW1 series. Here was a conflict where we were as bombarded by real photographic imagery and film of the horrors of war, that I felt a more realistic style of painting was necessary. I experimented with brown lines instead of black which softened the caricature nature of the painting and introduced more shading in the face, as well as brown/blood orange weathering. The blue uniforms of the French infantry, along with the orange brown dry brushing of mud and blood, created a visual beauty which was in contrast to the hopelessness of the story that the figures conveyed.

There is a wonderful symmetry with both these series, that illustrates the continuous dilemma that I face in my "days of play", between the worlds of horror, glory and fun. It is ironic that both owe their inspiration from the world of the comic book.

I would like to especially thank David Gauthier, and wish him good health and all the best for the future.