THE AGE OF ARTHUR
THE NORMAN ARMY

Welcome to Norman Armoured Knights as we continue editions to the Battle of Hastings. These knights are expected to be available in 2021, something to look forward to. 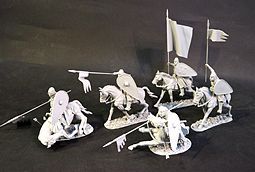 The most fearsome Anglo-Saxon warriors were King Harold's "Housecarls", which were among the finest foot soldiers in Europe. Their famous long 2 handed battle axe, which originated with the Vikings, was capable of cutting off the head of a man or a horse.

A look at the most famous source for the battle of Hastings - the Bayeux Tapestry - suggests that the weapons used by the English and the Normans were very similar. On both sides we see men wearing mail shirts and conical helmets with flat, fixed nasals, protecting themselves with shields and attacking their opponents with swords and spears (though spears are far more common).

When it came to tactics, however, the two sides at Hastings had very different ideas, as contemporary chroniclers noted. The English, after centuries of fighting against Vikings, fought in Scandinavian fashion, standing on foot and forming their celebrated 'shield-wall'.

The Norman elite, by contrast, despite their own Viking origins, had adapted during the course of the 10th century to fighting on horseback.

Therefore the "secret weapon" of the Norman army, were the armoured warriors which fought on horseback, with lances, swords and shields.

The Anglo Saxons used horses mainly to ride to the battlefield, so they were not accustomed to fighting Norman Knights.

The action at Hastings was therefore unconventional, with the English standing still on the top of a ridge, obliging the Norman cavalry to ride up a slope in order to engage them.

William had brought between 1,000-2,000 Norman Knights with him to England, and it was these troops which proved decisive in the invading army's victory at Hastings in 1066. 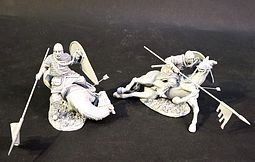 Norman Knights were trained from an early age to fight on horseback. Their horses known as "destriers" were bred to carry armoured men. These fierce horses were also trained to fight for themselves, biting and lashing out with their hooves at their enemy. 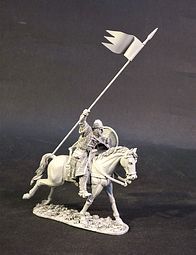 At the Battle of Hastings, initially it seemed that the English army's tactics would serve them well: despite repeated assaults from the Norman infantry and cavalry, the shield-wall held firm.

Some way into the battle, however, a crucial turning point occurred. A rumour ran through the Norman ranks that William had been killed, and some of his forces turned and started to flee. It was almost disastrous, and only retrieved by William removing his helmet and riding along the line to demonstrate that the rumour was untrue. But seeing their enemies retreating in disarray persuaded some of the English that the battle was won, and so they pursued them down the hillside. Once the Normans had recovered their composure, and wheeled round to attack their pursuers, they found that the shield-wall now had breaks in it.

The 1066 Norman army included many groups of knights who were trained to fight side by side under the same leaders. This meant they were disciplined and skilled in co-ordinating "feigned flight", and then turning and cutting down their pursuers.

All the sources agree that the battle of Hastings was a very bloody affair.

The Battle began at 9am on Saturday 14th October 1066, and both sides were still engaged at dusk, which was around 5pm.

The Anglo-Saxon Chronicle, speaks of "great slaughter on both sides".

William of Poitiers, describing the aftermath, wrote that "far and wide. the earth was covered with the flower of the English nobility and youth, drenched in blood".

For the Godwinson family in particular the battle was catastrophic, for not only King Harold, but two of his younger brothers, Leofwine and Gyrth, were among the fallen. (Another brother, Tostig, had been killed three weeks earlier at Stamford Bridge).

It is estimated that the Norman Army 7,000 strong, suffered around 2,000 casualties.

These new Norman Knights will be available in 2021.