THE CRUSADES
THE ALMORAVIDS

This week we visit a new collection coming available in January 2021, The Crusades. You can expect a level of detail and originality not seen before. Definitely something to look forward to in 2021. This will be the last of the future releases for 2020, we can look forward to more in the New Year.

We hope you enjoy! Have a wonderful Holiday Season and we wish all of you a very happy and successful New Year, hopefully we all can look forward to getting out of this Covid nightmare.

The Almoravids, also known as the Murabits, were a fundamentalist Islamic movement of the 11th and 12th Centuries. Founded by Ibn Yasin, in southern Morocco, they combined devotion to Islam with a fierce military tradition, and a desire to conquer. In 1070, the Almoravids established their capital city at Marrakesh, which at the time, was little more than a mosque in the desert surrounded by the tents of the faithful.

These years were, however the high point of the Almoravid expansion into Spain. Despite success on the battlefield they failed to reconquer much land from the Christians. By the mid 12th Century the Almoravid empire began to be replaced by a new North African power , the Almohads.

The Almoravid army started as a confederation of Berber tribes, who were motivated religious warriors, trained to stand shoulder to shoulder and accept casualties in the cause of Islam. Spearman and archers were the main force of the Almoravid army, and were especially effective against enemy cavalry, and Christian knights. 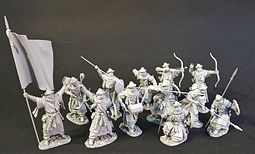 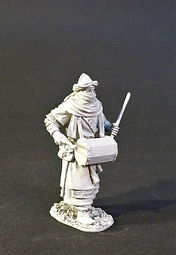 The Almoravid forces were considered disciplined by the standards of their time, and included large numbers of drummers to boost morale and issue orders. At the battle of Zalaca in 1086, the massed drumming terrified the Spanish.

THE BLACK GUARD AND ALMORAVID SPEARMEN

It is said that Ben Yusuf had an elite unit of 4,000 spearmen, known as "The Black Guard", who were decisive in defeating King Alfonso VI of Leon-Castile at the battle of Zalaca in 1086.

Later army commanders would also have similar units, such as the guards that were allegedly chained together to protect the Caliph Muhammad II's tent at Las Nava de Tolosa in 1212.

Probably the most characteristic feature of the Almoravid warrior was, his "litham" or face veil. The Almoravids were said to regard the mouth as unclean and referred to unveiled peoples as "the fly-mouthed".

The first of the Almoravid Figures will be released in January 2021.