THE AGE OF ARTHUR
THE BATTLE OF HASTINGS 1066

This week we return to one of John's most popular series The Battle of Hastings with Saxon's, Normans and Vikings all in the mix. We hope to see these during 2021.

The Battle of Hastings took place on the 14th October 1066. Although the numbers on each side were about equal, William had the advantage of having both cavalry, infantry and many archers.

Harold had only foot soldiers, and few archers. The English formed a shield wall along a ridge, and were initially so effective that the invading Norman army was repeatedly thrown back with heavy casualties.

The battle opened with the Norman archers shooting uphill at the English shield wall, to little effect.

The uphill angle meant that the arrows either bounced off the shields of the English or overshot their targets and flew over the top of the hill.

The lack of English archers actually hampered the Norman archers, as there were few English arrows to be gathered up and reused.

After the failed attack from the archers, William sent the spearmen forward to attack the Shieldwall. The infantry was unable to force any openings in the shield wall, which would have been taken advantage of by the supporting Norman cavalry.

A general retreat began, which was blamed on the Breton division on William's left.

The English forces had already began to break their solid shieldwall defensive position on the left and pursue the fleeing invaders. 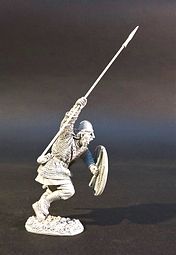 A rumour started that the duke had been killed, which also added to the confusion. It was then that William rode through his forces, showing his face and yelling that he was still alive, rallying his forces and leading a counter-attack against the pursuing English forces.

Seven new Saxon figures will be available early next year, which will help to capture the sense of the line breaking in pursuit of a fleeing army. 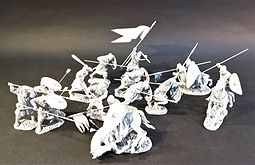 Harold appears to have died late in the battle, although accounts in the various sources are contradictory. Harold's death left the English forces leaderless, and they began to collapse. Many of them fled, but the soldiers of the royal household gathered around Harold's body and fought to the end.

The reason for the defeat probably lies in the events of the battle. William was the more experienced military leader. Some have criticized Harold for not exploiting the opportunity offered by the rumoured death of William early in the battle. But the English appear to have erred in not staying strictly on the defensive, for it was when they pursued the retreating Normans that they exposed their flanks, and their solid defensive formation, allowing them to be picked off one by one. Whether this was due to the inexperience of the English commanders or the indiscipline of the English soldiers is unclear.

It should be remembered that shieldwall battles normally were decided by one side finally breaking, so the English soldier in the heat of the engagement may well have been unable to help themselves pursuing a fleeing enemy.

The battle is an interesting example of the change of tactical developments which were offered by cavalry. It was to signal the end of the shieldwall era that had dominated northern European warfare for so long.

It demonstrated (not without difficulty) the superiority of Norman-French mixed cavalry and infantry tactics, over the Germanic- Scandinavian infantry traditions of the Anglo Saxons. 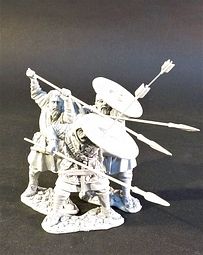 In the battles between the Anglo-Saxons and the Danes in England, most of the Saxon army would have consisted of the inexperienced Fyrd, which was a militia composed of free peasants. The shield wall tactic suited such soldiers, as it did not require extraordinary skill, being essentially a shoving and fencing match with weapons.

The front ranks would have been made up of select warriors, such as Houscarls and Thegns, who carried heavier weapons and wore armour. However the vast majority of opponents in such battles were armed with spears, which they used against the unprotected legs or faces of their opponents. Often soldiers would use their weapons to support each other by stabbing and slashing to the left or the right, rather than just ahead. Short weapons such as the ubiquitous Seax, could also be used in the tight quarters of the wall.

Archery and thrown missiles were limited and occurred in opening stages of battles, but were rarely decisive to the outcome.

Relatively lightly trained fyrdmen gained morale from being shoulder-to-shoulder with their comrades, but often fled once this was compromised. Once the wall was breached, or the commander was lost, it could prove difficult or impossible to re-establish a defensive line, and panic usually set in among the defenders.

Although the importance of the cavalry in the Battle of Hastings signaled the end of the shield wall tactic, massed shield walls would continue to be employed right up to the end of the 12th Century, especially in areas that were unsuitable for large scale mounted warfare, such as Scandinavia, and Scotland.

Harold's defeat was probably due to several circumstances. One was the need to defend against two almost simultaneous invasions.

He faced invasions not only by William, but also his own brother Tostig, and the Norwegian King Harold Hardrada. The northern invasion by Hardrada and Tostig defeated a hastily gathered army of Englishmen at the battle of Fulford on 20th September 1066, and in turn were defeated by Harold at the Battle of Stamford Bridge five days later.

Although with the deaths of Tostig and Hardrada at Stamford Bridge, it still left Harold with one serious opponent for the claim for the English crown. William landed his invasion forces in the south of England at Pevensey on 28th September 1066, and established a beachhead. Harold was forced to march south swiftly, gathering forces as he went.

For those collectors wishing to represent either of these two earlier battles, the painted Viking samples arrived recently! And I hope that they will all be available early next year.

THE BATTLE OF HASTINGS 1066
THE BRETONS

The Bretons were originally from the ancient province of Brittany which lies in the northwest peninsula of France. Formerly known as Armorica, a possession of the Roman Empire, this land consists of a plateau with a deeply indented coastline, and is broken by hills in the west. The region was renamed Britannia Minor by the Romans, following the emigration of six thousand Britons across the English channel, an event which took place at the behest of the Roman commander in Britain.

Originally of Celtic stock, the Bretons were mainly composed of three tribes from Cornwall, and South Wales, who were known as the Veniti, the Curiovolitae, and the Asismii. Their leader , Prince Cowan of Powys was married to the sister of St. Patrick and was considered to have been the most ancient Christian king in Europe.

Following the fall of the Roman Empire, and subsequent invasion of Britain by the Angles and the Saxons during the 5th and 6th centuries, many more Britons fled their ancient home. Many settled in Brittany, where the race that came to be known as the Bretons flourished. 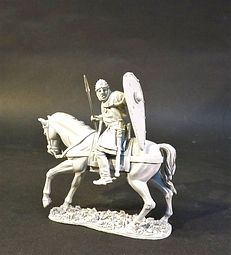 The Bretons constituted one third of the Norman forces at Hastings, and were to play a significant role in the Norman conquest of England.

The Bretons were led by Alan Rufus,(Alan The Red), and in the journey to meet the English at the battle site the Breton forces formed the vanguard, arriving a good half an hour before the rest of William's army. In the actual battle formation the Bretons were positioned on the left wing of Williams army.

Alan Rufus (c. 1040 -1093) was a Breton nobleman, cousin and companion of William the Conqueror during the Norman conquest of England.

He was the second son of Eozen Penteur, a Count of Brittany, and an older maternal first cousin of Edward King of England. 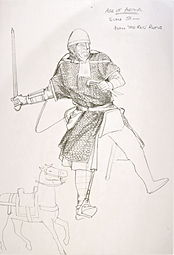 During the Battle of Hastings, there is evidence that Alan Rufus led William's Household Knights whilst Alan's brother Breon led the left wing. This put Alan in the perfecr position to co-ordinate feints with his brother. Breon would draw the inexperienced Saxon fyrdmen forward, and the other would follow in behind and isolate the pursuing Saxons. This was a modification of tactics used by the Bretons for many years. An example being the Battle of Jengland AD851.

Several documents refer to Gyrth Godwinson, Harold's younger brother and Earl of East Anglia, leading an assault on William's position. William's horse was cut down from under him, Gyrth seeing this moved to kill him, but someone stopped him, and Gyrth was killed instead. Without the experienced leadership of Gyrth at the front of the shield wall, and since Harold's other younger brother Leofric Earl of Essex had already fallen, this probably proved decisive factor in the English defeat.

William's chroniclers say he cut down Gyrth, but Domesday evidence tells us that one of William's Breton allies rode to his rescue, either Ralph "the Staller", or Alan Rufus.

Alan Rufus, and many of the Breton Knights were to be granted considerable land holdings by William the Conqueror in return for their services.

Rufus would receive land in Northern England and later he would build Richmond Castle. Many of Alan Rufus's early acquisitions in England included many land titles that had been in the possession of King Harold's wife Edith the Fair, including all but one of her holdings in Cambridgeshire.

By 1086 Alan had become one of the richest and most powerful men in England.

Unfortunately the Bretons will not be available until mid to late 2021.