THE RED BAND OF JAGDGESCHWADER 53

This week we return to World War II and the introduction of 2 BF109. These should be available in December.

Jagdgeschwader 53 (JG 53) was a Luftwaffe fighter wing of the Second World War. It operated in Western Europe and in the Mediterranean. It was better known as the "PIK As" (Ace of Spades) Geschwader, and was one of the oldest German fighter units of WW2, with its origins going back to 1937.

At the start of the war a high proportion of its personnel were experienced ex-Condor Legion pilots, including Werner Molders.

On 14th May 1940, JG 53 claimed some 43 victories in one day. The Battle of France thus saw the Geschwader score heavily during May and June 1940, with some 275 claims against Armee de l'Air, and the Royal Air Force.

For a short period during 1940, all three Gruppen of JG53, and only JG53, displayed two distinct anomalies in their markings, the purposes of which have yet to be fully resolved.

The first anomoly concerns the replacement of the 'Pik As' (Ace of Spades) emblem.

According to RAF Air Ministry Weekly Intelligence Summary NO.50, Hermann Goring ordered the emblem be removed and replaced with a red band and the Geschwader renamed the 'Red Ring Geschwader', or in some accounts as "The Red Band of Shame".

The first recorded incident of a Bf 109 E being brought down over England where the red band had replaced the' Pik As' emblem occurred on 16 August. On that date the aircraft of Fw. Christian Hansen of 2./JG53 force landed at Godshill on the Isle of Wight and when examined was reported in Crashed Enemy Aircraft Report NO.11 as having a "...red band around nose 6 in wide".

While there is some evidence to suggest that it may have stemmed from some personal antipathy on the part of Goring, or possibly from some ideological difference with the leadership of the Geschwader, (H-J von Cramon-Taubadel is understood to have had a Jewish wife), the actual reason for the order has yet to be determined.

In the past, several valid theories for this change have been examined in depth, but most have been subsequently disproven although one, containing some merit, submits that it may have been nothing more than a temporary identification feature.

However, there was one event which transpired at this time and another which may have been of some significance. During early August, at around the time of the appearance of these red bands, Goring replaced the majority of the Jagdwaffe Kommodore with younger men, although two units serving with Luftflotte 3, JG27 and JG53, retained their existing Kommodore until October.

Then, at the beginning of that month, after Obit. Gunther von Maltzahn took command of the Geschwader from Obit. Hans-Jurgen von Cramon-Taubadel, the 'Pik As' emblem began to reappear on JG53's aircraft in a somewhat newer and larger format than previously seen.

Fifty One year old Hauptman Wilhem Meyer Meyerweissflog, had been an observer with the German air force during WW1. It is uncertain in what capacity he had been attached to JG 53, but he had flown on operations on a number of occasions.

Having returned from leave during the evening of 5th September, he spotted a large number of aircraft taking off, and decided to join them in his Bf-109. By the time he had taken off, he was flying alone, and was to be picked off by a Spitfire, which was probably flown by experienced Australian Ace, Flg Off Pat Hughes of No. 234 squadron.

With an overheating engine, Meyerweissflog was forced to crash land, in Kent, and duly taken prisoner. He was eventually repatriated in 1944. 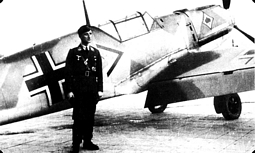 The first jjD Bf109 model is based on the aircraft which crash landed at Monkton Farm, near Manston, Kent on 5th September 1940, at 16.45 hrs, during an aerial combat with Spitfires over Chatham. The pilot Hauptmann Wilhem Meyerweissflog was captured unhurt and became a POW.

The RAF Crash Report, indicates that the aircraft was camouflaged in light navy grey with a red band around the cowling and with red/white spinner and white wing tips. 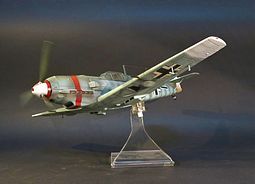 The second anomoly, and one frequently recorded as a political gesture on the part of the Geschwader, occurred almost concurrently with the reintroduction of the' Pik As' emblem. Many aircraft from II. and III Gruppen had the Hakenkreuz on their fins overpainted, with several pilots using these areas to display their individual Abschuss tallies rather than in the more usual location on the rudder. How long this lasted is not known for certain but some aircraft of III.Gruppe were recorded as still without their Hakenkreuz in late November 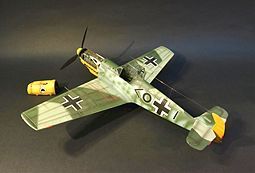 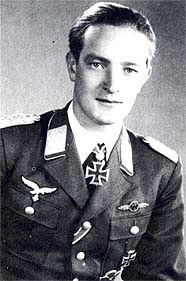 Initially volunteering for military service in the army in 1938, he completed flight training in 1939, and was posted to JG 53. Flying with this wing Muller claimed his first aerial victory on 27th May 1940 during the Battle of France. He was to claim his 100th aerial victory on the eastern front in 1942, and was awarded the Knight's Cross of the Iron Cross with Oak Leaves, on 23rd September 1942.

Muller was killed in a landing accident on 29th May 1944, and was posthumously promoted to Oberstleutnant. 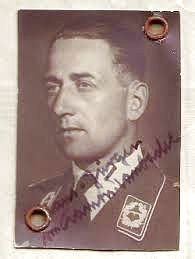 Was a German Luftwaffe GeschwaderKommodore of Jagdgeschwader 53 (JG 53) "Pik As".

He served as one of the first Staffelkaptains of the newly formed Luftwaffe, based in Dobernitz in 1934 with 2/JG 70 prior to going to II/JG 54.

On December 21st 1939, Von Cramon - Taubadel was leading a flight of ten Bf 109E's from JG 54, over the lines near Karlsruhe when they engaged 12 Morane-Saulnier M.S. 406's. Cramon claimed 3 French aircraft shot down. Only one was to be confirmed.

He was to fly in the battle of Britain, and on 16th August 1940 , damaged his Bf 109 E on landing. The second victory was claimed on 27th September 1940, and was a Hurricane near Dungeness.

During August and September Goring replaced the majority of the pre-war pilots with younger up and coming aces, with major Gunther Freiherr von Maltzahn taking over from von Cramon-Taubadel on Seotember 30th 1940.

Viola von Kaufmann-Asse was of Jewish ancestry, which has led to the speculation of the origins of the Red bands of SG 53.

Gradually we are re-tooling many of the early models. The Bf-109 has always been one of my favurite Second World War aircraft, and I have always found the story of the Red Band of JG 53, fascinating.

Both models will be available with next months December releases.