Welcome to the May edition #1, here we visit Japan and the Gempei War.  We also visit the world of Vikings and the Viking Sagas. 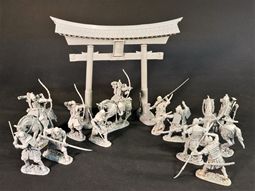 The Gempei War which took place between 1180 and 1185 .  Was a national civil war between the Taira and Minamoto clans during the late Heian period of Japan. It resulted in the downfall of the Taira and the establishment of the Kamakura shogunate under Minamoto no Yoritomo, who appointed himself as Shogun in 1192, governing Japan as a military dictator from the eastern city of Kamakura.

The name Gempei or Genpei comes from the words Minamoto (Gen) and Taira (Hei, which was pronounced as pei) These two families were fierce rivals, both were ancient families, descended from royalty. The Heike or Taira had close ties with the court, and were well known as accomplished artists and men of letters as well as great warriors. The Genji or Minamota were rustics, and each side derided the other for their chosen lifestyles.

Minamoto no kuro Yoshitsune was one of the most famous samurai commanders, not just in the Gempei war, but throughout the whole of Japanese history. He inspired his followers to three celebrated victories that brought the Gempei war to a successful conclusion. It was said that he was taught sword fighting by the the goblins of the forest, and was famous for defeating the giant monk Benkei, who then became one of his faithful followers. 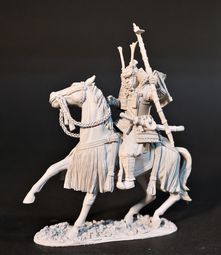 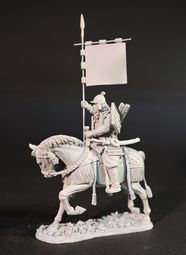 Battlefied control was obviously difficult between two simularilly dressed armies. Flags were carried into battle by foot soldiers or by mounted men who rode alongside the elite samurai mounted archers. It is generally agreed that the Taira carried red flags and the Minamoto white flags. These flags were then decorated by mon (badges) attributed to the two families. The Taira clan was associated with the mon of a stylised black butterly, and the Minamota clan with a design based on the gentian plant. The banners of Red and white would come to mean much the same to Japanese, as the "blue and Grey" would mean to Americans.

Of all the weapons wielded on the Gempei battlefields, none was more highly regarded than the Yumi, the Japanese longbow. All elite samurai warriors were skilled archers, and were usually mounted. The essence of the mounted Samurai archer's role was to be an individual marksman. Every arrow was intended for an honourable opponent. Traditional battles began by the firing of signal arrows high into the air over the enemy lines. Each signal arrow had a large bulblike perforated wooden head, which whistled as it flew through the air. The sound was a call to the gods to draw attention to the great deeds of bravery which were about to be performed by the rival warriors Individual combats would then be fought, between opponents who sought each other out by issuing verbal challenges that involved reciting their exploits and their pedigrees.

The box like yoroi armour which the samurai elite wore certainly influenced how they were to fight. These silk and lacquered leather scaled armour plates provided good protection for the body, and was not too heavy.

The main disadvantage of the yoroi was not the weight but its rigid box-like design, which restricted the samurai's movements when he was dismounted or using hand weapons from the saddle. 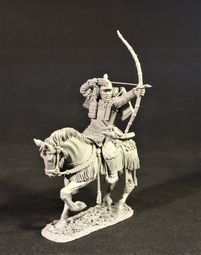 The monastic sohei, made a third force, and sometimes fought for the Genji and sometimes for the Heike. The first major battle, the battle of Uji Bridge in 1180 the sohei from Todai-ji, which was a pro Minamota temple, engaged a huge force of Heike. The warrior monks initially played a major role in the Gempei war.The monks favourite weapon seems to have been the naginata, and they wore basic armour under the traditional monk's robes. 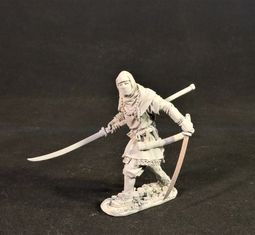 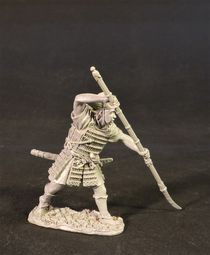 Each Samurai would usually be accompanied by a small group of lighter armoured men. Retainers or less wealthy samurai often wore a simpler armour, known as a do-maru. This again was laced with treated leather and silk. This type of armour was fairly common in the earlier periods and was one of the cheapest available at the time.

So far reaching were the political and social outcomes of the Gempei War that, of all of Japan's many internal conflicts, it has come to be seen as THE Japanese civil war. The two rival clans, the Taira and the Minamoto, clashed in an epic and protracted struggle that defined the ethos of the samurai warrior caste. It was fought to gain control over the Emperor, which would end with the eclipse of Imperial power as the samurai positioned themselves in the mainstream of Japanese political life, remaining there until the emergence of modern Japan in 1868.

Although the Gempei war can be considered a revolution in terms of its eventual outcome, there was nothing revolutionary about the way the war was conducted. Its stragedy, tactics and weaponry were stuck in the technology of samurai warfare that had already been developing since the 11th Century. This continued and the relatively unchanged visual image of samurai warfare, which was an aristocratic warrior holding a bow, mounted on a horse and dressed in a style of armour known as a yoroi, remained in place at least for another hundred years, including the Mongol Invasion of Japan in 1274 and 1281.

The first of the Gempei War series should be available this summer.

THE CONQUEST OF AMERICA
SKRAELINGS, THE BEOTHUK 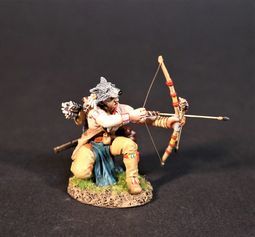 The word Skraeling is most likely related to the old Norse word "skra", meaning "dried skin", which is believed to be in reference to the animal pelts worn by the native Americans. 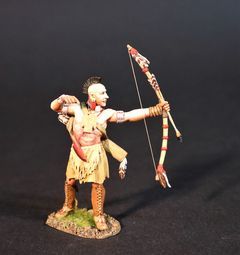 The term is thought to have been first used by Ari Thorgilsson in his work called "The Book Of The Icelanders". The book was written well after the period in which Norse explorers made their first contacts with indigenous Americans. By the time of the book, Skraeling was probably the common term Norse Greenlanders used for the Thule people, who were the ancestors of the modern Inuit. The Greenlander's Saga and the Sago of Erik the Red, which were written in the 13th Century, use this term for the people of the area known as Vinland whom the Norse met in the early 11th Century. The word has subsequently become well known and has been used in the English language since the 18th Century.

Probably the most likely local inhabitants of the area named as Vinland were the Beothuk, or at least their ancestors. The meaning of the word Beothuk is obscure, but "people" or "good people" are possibilities. They lived in villages made up of a number of cone-shaped houses called "Mamateeks". Unfortunately the Beothuk have since vanished, with the last of their tribe believed to have died in the 19th Century.

Ethnologists have recognized what are at least similarities between the Beothuk peoples and other still existing tribes native to North America, like the Algonquin Indians. This helps give us some insight into the Beothuk, their weapons and the way in which they lived. 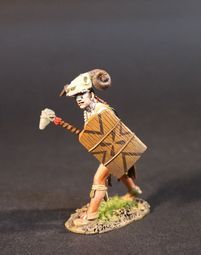 There was a vast difference in the weapons possessed by the Beothuk and those available to the Vikings. The most significant variation was the ability of the Vikings to smelt iron in order to create high quality swords and axes, along with iron tipped spears and arrows. The Beothuk were in awe and fear of these iron weapons. In one saga it tells of "One of the Skraelings had picked up an axe, and after examining it for a moment, he swung it at a man standing beside him, who fell dead at once".

The vikings had nothing good to say about the people they met. They referred to these people as poor traders, primitive people who were easily scared.

Norse exploration of the new world began with the initial sighting of North America by an Icelander named Bjarni Herjolfsson, who spotted land after drifting off course on a journey to Greenland in 985. They speculated amongst themselves as to what land this might be, for Bjarni said he suspected this was not Greenland. His voyage piqued the interest of later explorers including Leif Eriksson, who would explore and name the areas of Helluland, Markland and Vinland. Eriksson laid the groundwork for later colonizing efforts in the generations to come by establishing a foothold on Vinland, when he constructed some "large houses." There was great discussion of Leif's Vinland voyage, and his brother Thorvald felt they had not explored enough of the land. Leif then told Thorvald, 'You go to Vinland, brother, and take my ship if you wish, but before you do so I want the ship to make a trip to the skerry to fetch the wood that Thorir had there." Thorvald has the first contact with the native population which would come to be known as the Skraelings. After capturing and killing eight of the natives, they were attacked at their beached ships, which they defended. 'I have been wounded under my arm,' he said. 'An arrow flew between the edge of the ship and the shield into my armpit. Here is the arrow, and this wound will cause my death." 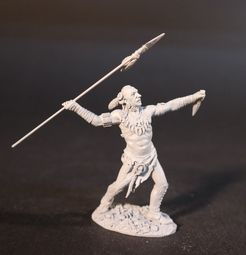 Thorfinn Karlsefni was the first Viking explorer to attempt to truly colonize the newly discovered land of Vinland on the same site as his predecessors Thorvald and Leif Eriksson. According to the Saga of Erik The Red, he set sail with 3 ships and 140 men. Upon reaching Vinland, their intended destination, they found the now famous grapes and self-sown wheat for which the land was named. They spent a very hard winter at this site, where they barely survived by fishing, hunting game inland, and gathering eggs on the island. The following summer they sailed to the island of Hop where they had the first peaceful interactions with the native people, with whom they traded. Karlsefni forbade his men to trade their swords and spears, so they mainly exchanged their red cloth for pelts. Afterwards they were able to describe the aboriginal inhabitants in detail, saying: "They were short in height with threatening features and tangled hair on their heads. Their eyes were large and their cheeks broad." Shortly thereafter, the Norsemen were attacked by natives who had been frightened by a bull that broke loose from their encampment. They were forced to retreat to an easily defensible location and engage their attackers; at the end of the battle two of his men had been slain, while "many of the natives" were killed. As with anywhere, in this foreign land, Karlsefni and his men realized that despite everything the land had to offer there, they would be under constant threat of attack from its prior inhabitants. 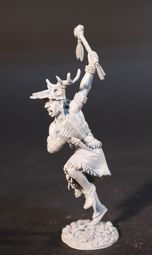 After this adventure, they returned to Greenland. Their three-year excursion would be the longest lasting known European colony in the New World until Columbus's voyages nearly 500 years later initiated full-scale European conquest of the Americas.

The first of this small collection of Beothuk Native Americans will start to be available this summer.