THE ANCIENTS COLLECTION THE CARTHAGINIANS AND THEIR ALLIES

The military of Carthage was one of the largest military forces in the ancient world. Although the navy was always Carthage's main force, the army acquired a key role in the spread of Carthaginian power. With its Phoenician origins, Carthage already had a long history as a seafaring people. This was helped in that the navy was a permanently manned force, whilst the army would be enlisted only for a particular campaign and then demobilized.

Therefore it was easier to understand how the Carthaginian army was a Combined arms force, which comprised light and heavy infantry, skirmishers, light and heavy cavalry, as well as elephants. The supreme command of the military was initially held by the civilian "Suffetes" until the third century. Thereafter, professional military generals were appointed directly by the Carthaginian Senate. Whilst the navy was mainly manned by citizens, the army was composed almost exclusively of foreign mercenary units, particularly Libyans, Numidians, Iberians, Gauls and Greeks. Only when the city of Carthage itself was threatened would citizens be conscripted into infantry service. 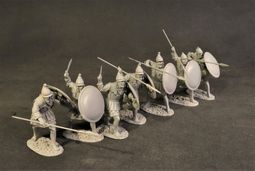 The backbone of any Carthaginian army and their most reliable troops were the Liby-Phoenician spearmen. The Libyans were not merely mercenaries but could be provided by allied city states or might have been conscripted from a peasant base.

Before Hannibal's Italian campaign they were presumably armed with long spears, round or oval shields and wore bronze helmets, and wore a linen cuirasses as protective armour. 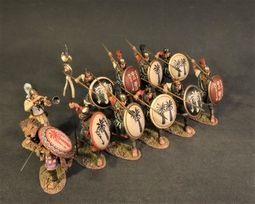 Polybios reports that at the battle of Cannae in 216BC, "the armour of the Libyans was Roman, for Hannibal had armed them with a selection of the spoils taken in previous battles."

This would suggest that the look of the Libyan-Phoenician spearmen took on a more Roman appearance, with their armour changed from the Greek influenced linen cuirasses to chain mail.

It would also be possible to imagine many of these veteran infantry were armed with the Roman scutum. 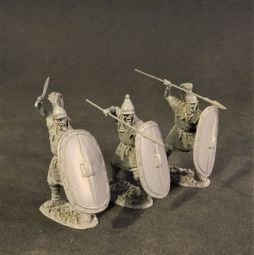 The Numidians were the Berber population of Numidia (present day Algeria and in a smaller part of Tunisia). The Numidians were one of the earliest Berber tribes to trade with the settlers of Carthage, and as Carthage grew , the relationship with the Numidians blossomed. Carthage's military used the Numidian cavalry as mercenaries. Numidia provided some of the highest quality cavalry of the second Punic war, and the Numidian cavalry played a key role in a number of battles, both early on in support of Hannibal and later in the war after switching allegiances, to the Roman Republic.

Ancient authors, such as Polybius and Livy, tend to stress Carthage's reliance on mercenary units, which is slightly misleading when applied to the Carthaginian army. While Carthage did employ mercenaries in the true sense of the word, Carthage's usage of native African and Iberian recruits would not be true mercenaries as these peoples were subjects of Carthage.

Also Carthage's army was composed of recruits from its allies fighting for Carthage in accordance with bilateral treatise. The Numidian Kingdoms are an example who provided extensive light cavalry due to the close relationship between the two states. 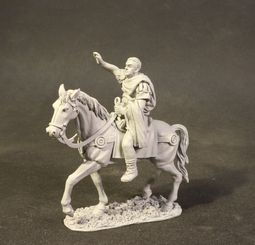 Publius Cornelius Scipio Africanus (236/5 - 183 BC) was a Roman general and later consul who is often regarded as one of the greatest military commanders and strategists of all time.

His main achievements were during the Second Punic War, and is best known for defeating Hannibal at the final battle of Zama in 202BC. This victory was one of the feats that earned him the agnomen "Africanus".

His conquest of Carthaginian Iberia culminated in the Battle of Ilipa in 206BC against Hannibal's brother Mago Barca. 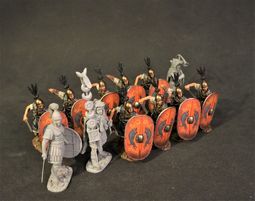 The Roman army of the mid-Republic (also known as the manipular Roman army or the "Polybian army"), refers to the armed forces deployed by the mid-Roman Republic, from the end of the Samnite Wars (290 BC) to the end of the Social War (88 BC). The first phase of this army, in its manipular structure (290-ca. 130 BC), is described in detail in the Histories of the ancient Greek historian Polybius, writing before 146 BC.

The central feature of the mid-Republican army was the manipular organisation of its battle-line. Instead of a single, large mass (the phalanx) as in the Greek and Early Roman army, the Romans now drew up in three lines (triplex acies) consisting of small units (maniples) of 120 men, arrayed in chessboard fashion, giving much greater tactical strength and flexibility. By the time of the Punic wars infantry were sorted into classes according to age and experience rather than wealth. The Principes then became the older veterans but their equipment and role remained the same.

The Principes (singular princeps) were originally men in the prime of their lives , who were also fairly wealthy, and could therefore afford decent equipment. These were the heavier infantry of the legion, and their usual position was the second battle line 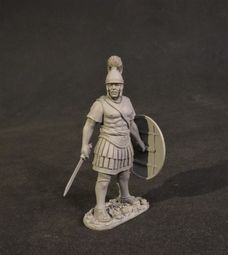 The velites would gather at the front , and cover the advance of the hastate. If the hastate failed to break the enemy, they would fall back on the Principes. If the principes could not break them then they would retire behind the Triarii.

This order of battle was almost always followed. It was Scipio Africanus at the Battle of The Great Plains, and the Battle of Zama, who modified this tactic. 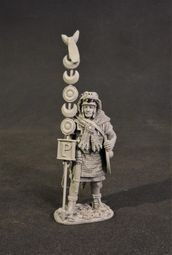 At the Great Plains, scipio the Roman General, formed his men up in the usual manner, but once the Hastati had begun to engage the enemy, he used his principes and triarii as a flanking force, routing the opposing Carthaginians.

At Zama, Scipio arranged his men into columns, side by side, with large lanes in between. The opposing Carthaginian elephants were drawn into these lanes where many were killed by the Velites, without inflicting many casualties on the Romans. Once the surviving elephants had been routed, he formed his men into a long line with his Triarii and Principes in the centre and hastate on the flanks, ready to engage the Carthaginian infantry. 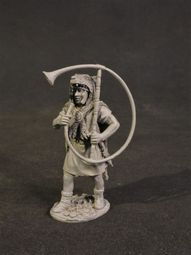 The Punic Wars has always been one of those "must do" projects. It includes two of the greatest generals in antiquity, and two armies that fought in completely different styles. The sheer variety and colour of all the various troop types was a major factor in drawing me into this period.

Its been a long journey, but I hope by the end of this year, I will have broken the back of most of the relevant troop types, which will leave me some time to maybe concentrate on a few elephants for 2021!

More command sets for the Triarii and Hastati should be previewed next month, and I hope that the figures will start to be available towards the end of the year.