The 11th Regiment New York Volunteer Infantry was an infantry regiment of the Union army in the early years of the American Civil War. The regiment was organized in New York City in May 1861 as a zouave regiment, known for its unusual dress and drill style, by Colonel Elmer E. Ellsworth, a personal friend of US president Abraham Lincoln. The troops were drawn from the ranks of the city's many volunteer fire companies, and the unit was also known as the Ellsworth Zouaves, First Fire Zouaves, First Regiment New York Zouaves, and US National Guards. 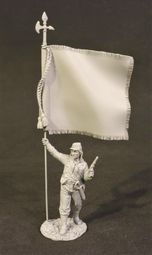 The unit was among the first to occupy the territory of a Confederate state when it captured Alexandria, Virginia on May 24th 1861, less than 24 hours after the commonwealth seceded from the Union. The regiment then went on to suffer extensive casualties during the First Battle of Bull Run, during the fighting on Henry House Hill, and whilst serving as a rearguard for the retreating Union army. 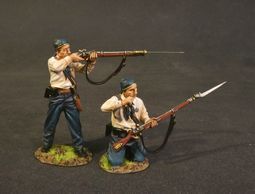 The regiment would later be stationed near Hampton Roads during the Peninsula Campaign, but experienced little fighting. It was sent back to New York city in May 1862, and the regiment was mustered out of service on June 1862. There were several attempts to reorganize as a light infantry regiment through the summer of 1863, and many new enlistees were involved in suppressing the New York Draft riots. This was to fail and the enlistees were transferred to the 17th New York Veteran Volunteer Infantry Regiment. 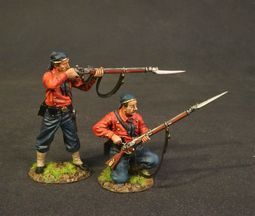 Ellsworth's Fire Zouaves marched to Manassas in their zouave jackets and trousers, with red firemen's shirts and blue fezzes. In the July heat the zouave jackets were abandoned, and most men continued in their red or white firemen's shirts, and some even added havelock-covered kepis to replace the fezzes. With the officers dressed in Grey, this gave the unit, a motley, multi coloured appearance.

The first sets of the Fire Zouaves, will hopefully be available from October. 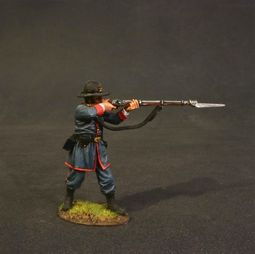 The American civil War is a fascinating period, which has been well covered by several manufacturers in the past. It's taken a while to find my direction with this conflict, and I owe a big thank you to the JJD Facebook Group, whose Poll in 2018 voted for the 11th Regiment New York Volunteer Infantry, as a possible future American Civil war unit. A very special thank you to those from the facebook group who followed up suggesting a First Bull Run series.

Its funny how things come together. It was during my last trip to the USA that Louis Bodalato treated me to a Porterhouse steak lunch, and spent the entire time talking about his and Alex his sons' passion for collecting figures from the 14th Brooklyn and the 39th Garibaldi Guard Regiment.

So for Louis and Alex (and especially since they tie into the First Bull Run theme), proof I can be bought! And a friendly reminder for those facebook members, to be careful what they vote for?

The 39th new York Infantry Regiment, known as the Garibaldi Guard, after the Italian revolutionary, was originally assembled in New York city by the Union Defense Committee, under the leadership of Col. Frederick George D'Utassy.

During July 1861, the 39th participated in the movement of the army towards Manassas, it was attached to the 1st Brigade, of the 5th Division, and only became slightly engaged at the First battle of Bull Run. 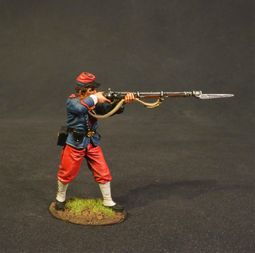 During the civil war the men of the 14th Brooklyn became well known by both armies and throughout the country for their hard drill, hard fighting, and constant refusal to stand down from a fight.

They received their nickname, the "Red legged Devils", during the First Battle of Bull Run.

I hope these will eventually see their way into Louis and Alex's collections, sometime in 2021.

There are of course several Confederate units already in development, which will be previewed in a couple of weeks time.