Wars of The Roses

Due to popular demand! John has decided to return to the Monday News updates, as it is also the easiest way to keep everyone informed of new developments and future plans.

Coming hopefully later this year, some new additions to the Wars of The Roses series.

The Battle of Bosworth was the last significant battle of the Wars of The Roses, the civil war between the houses of Lancaster and York that extended across England in the latter half of the 15th Century

The Battle of Bosworth was the last significant battle of the Wars of The Roses, the civil war between the houses of Lancaster and York that extended across England in the latter half of the 15th Century 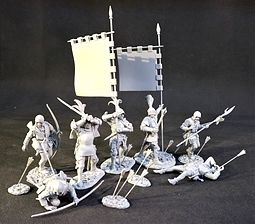 Along with the previously previewed casualty figures are 3 new Retinue figures which will represent Sir Thomas Howard, of Ashwellthorpe, Earl of Surrey, and his banners. 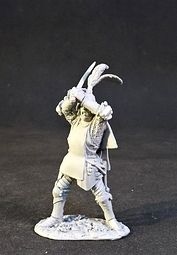 In 1513 he led the English army to victory over the Scots at the decisive Battle of Flodden, for which he was richly rewarded by King Henry VIII, who was at that time away in France. 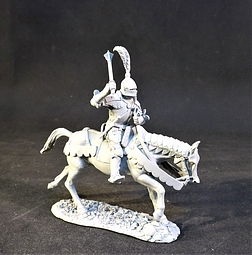 There is also an extra mounted knight to join the Yorkist king Richard III, on his final charge.

Richard had seen Henry separated from his main force during the battle, and decided to end the fight quickly by killing the enemy commander. He led the charge of mounted knights into Henry's small group of men.

Oxford had left a small reserve of pike equipped mercenaries with Henry, which proved critical in slowing down the pace of the charging knights.

Seeing Richard embroiled with Henry's men, and separated from his main force, William Stanley made a decision to ride to the aid of Henry.

Now outnumbered, the Yorkist group was surrounded and gradually driven back, where "King Richard, alone, was killed fighting manfully in the thickest press of his enemies". 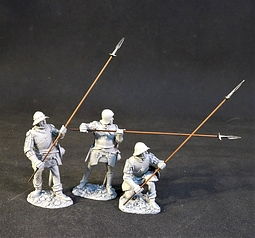 As news of Richards death spread, his force disintegrated, and the battle was over.