The main part of the Norman army were cavalry, and as you can see from the attached picture they are well underway!

Apart from those shown in the above picture, there are also another 7 different poses in the pipeline.

We know that the English forces were deployed in a dense shieldwall formation at the top of a slope, (which newer sources suggests was Caldbec Hill), with their flanks protected by woods, and with marshy ground in front of them.

What is known about the Norman deployment, is that Duke William appears to have arranged his forces in 3 groups or "battles". The left "battle" consisted mainly of Bretons, and was led by Alan The Red.

The Centre was held by the Normans, under direct command of the Duke, and the right was commanded by William Fitzosbern and Eustace II of Boulogne, and consisted of Frenchmen. and mercenaries from Picardy, Boulogne and Flanders.

The front lines of the invading force were made up of archers, with a secondary line of foot soldiers armed with spears and swords. The cavalry was held in reserve.

The Norman disposition of forces implies that the plan was to open the battle with archers, weakening the enemy with arrows, followed by infantry who would engage the shieldwall in close combat. The infantry would create openings in the English lines that would then be exploited by cavalry charges.

It is believed that the early barrage of arrows, probably had very little effect on the English shieldwall, due to the higher position of the English on the ridge.

There are currently 8 Norman bowmen in production. Hopefully these will start to be available around August this year. There will be 2 colour schemes of each figure. At this time am not sure if there will be any Crusader variations. Please let me know if there is any interest in some Crusader bowmen. 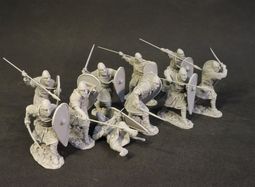 There are currently 10 Norman armoured infantry in production. Hopefully these will start to be available around August this year. There will be 3 colour schemes of each figure, including a Crusader variant. 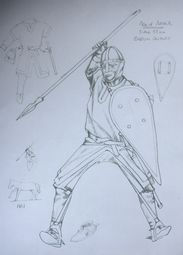 At this time, work has started on some Breton Cavalry. Previewed is a preliminary concept drawing of one of 6 Breton cavalry figures in development.

The first time I came across the Battle of Hastings was in my first year at secondary school. My history teacher, Mr. Thomas was not only the first person to introduce me to history, he was also the first person who went into such detail, about battles, and how the armies were composed and set up.

He was an inspiration, and that class is probably the main reason why 45 years later I decided to work on a 1066 series.

The Bernard Cornwell novels, have also always fascinated me, and his detailed descriptions of his characters in the heat of battles were always fascinating and inciteful. The "Saxon Chronicle" books were especially informative on how combat in a "shieldwall" would have been like.

Despite the success of the TV series, "The Last Kingdom", which is based on the series of Cornwell's books, I didn't really expect the new Saxon range to be that popular. (I have to thank both Pete and Roy from the UK for continually "bugging" me to produce Dark Age "shieldwall" figures!)

I've therefore been pleasantly surprised, with schools, museums and collectors from all around the world, contacting me to let me know how much they were enjoying this series.

It is with that same enthusiasm I had as a 12 year old, that I hope to continue to add to this range for a good while yet.