DRUMS ALONG THE MOHAWK THE BATTLE OF ORISKANY, 1777.

The Battle of Oriskany on August 6, 1777 was one of the bloodiest battles in the American Revolutionary War and a significant engagement of the Saratoga campaign. A party of Loyalists and several Indian allies ambushed an American military party that was trying to relieve the siege of Fort Stanwix. This was one of the few battles in which almost all of the participants were Americans; Patriots and allied Oneidas fought against Loyalists and allied Iroquois in the absence of British regular soldiers.

The Patriot relief force came from the Mohawk Valley under General Nicholas Herkimer and numbered around 800 men of the Tryon County militia plus a party of Oneida warriors. British commander Barry St. Leger authorized an intercepting force consisting of a Hanau Jager (light infantry) detachment, Sir John Johnson's King's Royal Regiment of New York, Indian allies from the Six Nations, particularly Mohawks and Senecas and other tribes to the north and west, and Indian Department Rangers, totaling at least 450 men.

The Loyalist and Indian force ambushed Herkimer's force in a small valley about six miles (10 km) east of Fort Stanwix, near the village of Oriskany, New York. Herkimer was mortally wounded, and the battle cost the Patriots approximately 450 casualties, while the Loyalists and Indians lost approximately 150 dead and wounded. The result of the battle remains ambiguous. The apparent Loyalist victory was significantly affected by a sortie from Fort Stanwix in which the Loyalist camps were sacked, damaging morale among the allied Indians.

The battle also marked the beginning of a war among the Iroquois, as Oneida warriors under Colonel Louis and Han Yerry allied with the American cause. Most of the other Iroquois tribes allied with the British, especially the Mohawks and Senecas.

When reading the book, "Drums Along the Mohawk", although there are long and graphic descriptions of the battle, very little is credited to the part of the Oneida warriors that took part.

The name most commonly that comes to mind when recounting the battle of Oriskany, is that of General Nicholas Herkimer, but one of the unsung heroes of the battle was an Oneida warrior named Han Yerry Tehawengaragwen. He was the leader of a small band of Oneidas who joined the ranks of the colonists, and fought bravely by their side during the battle.

It is believed that almost 500 people were wounded during the opening volley of the battle, when General Herkimer sustained his mortal wounds.

Han Yerry ,had also been wounded during this initial volley. He had been shot in the wrist, and was unable to use his musket. Instead he fought gallantly with his tomahawk. By his side throughout the battle, brandishing a pistol, was his wife Sara Tyonajaneger, also one of his sons, and his half brother, Tonyentagoyon.

Han Yerry died as a result of his wounds during the battle, but his wife survived. 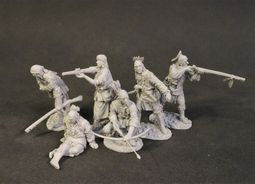 Today's preview represents 6 new prototypes of Han Yerry, his wife and fellow Oneida warriors who fought at the Battle of Oriskany.

These figures should be available towards the end of this year.

I knew nothing about this small but significant battle, until I read the book, "Drums Along the Mohawk". Although the book covers the battle in great detail, it almost ignores completely the role of the American's Oneida allies.

The movie avoids the cinematic depiction of the actual battle, and re-tells the story of the fight only from the point of view of the wounded and psychologically injured Gilbert Martin, after he has returned.

So it was whilst researching for more information that I came across the Don Troiani painting "The Oneida at the Battle of Oriskany". I found it particularly interesting that the subject of his work, was not General Herkimer, but an Oneida couple. 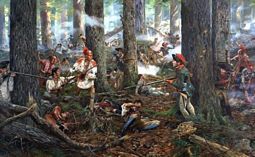 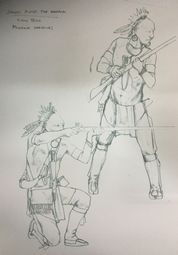 Further research led me to discover the stories of Han Yerry and his wife, which is what inspired me to create a half dozen figures representing these Oneida warriors. Its another illustration of how "fact is greater than fiction", and once you start investigating and reading more about these events, there are enough amazing stories, without having to make things up!

There always seem to be some woodland Indians on the workbench! And there are several new Mohawk and Seneca warriors being prepared, which should be compatible with previous French and Indian war figures, as well as suitable for the Bushy Run series.

These will hopefully be available early 2021.

The regiment served with distinction throughout the war, launching frequent raids and relief missions into the Mohawk valley of New York.

A detachment of Johnson's light Infantry had originally been sent out to monitor Herkimer's advance.

It was these King's Royal Yorkers who were positioned behind a rise in the ground, with their Indian allies concealed along both sides of a ravine. The plan of the ambush was for the Yorkers to stop the head of the column, after which the Indians would attack the extended column.

These figures should also hopefully be available in early 2021. 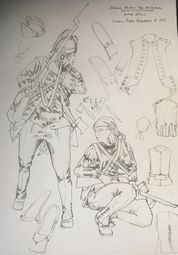