This week we return to the year 1066 when the Vikings and Normans where wrecking havoc on the English countryside. Just imagine marching all the way from London and the South up to the North of England to Stamford Bridge and fighting a pitch battle with mean looking Vikings. Before marching back to face the invading Norman Army. We should see the first of these in the second half of 2021.

The Battle of Hastings took place on the 14th October 1066. Although the numbers on each side were about equal, William had the advantage of having both cavalry, infantry and many archers.

Harold had only foot soldiers, and few archers. The English formed a shield wall along a ridge, and were initially so effective that the invading Norman army was repeatedly thrown back with heavy casualties. 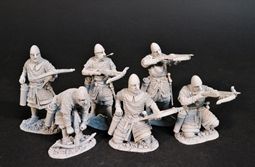 The battle opened with the Norman archers shooting uphill at the English shield wall,...to little effect.

The uphill angle meant that the arrows either bounced off the shields of the English or overshot their targets and flew over the top of the hill.

The lack of English archers actually hampered the Norman archers, as there were few English arrows to be gathered up and reused.

After the failed attack from the archers, William sent the spearmen forward to attack the Shieldwall. The infantry was unable to force any openings in the shield wall, which would have been taken advantage of by the supporting Norman cavalry.

A general retreat began, which was blamed on the Breton division on William' s left.

The English forces had already began to break their solid shieldwall defensive position on the left and pursue the fleeing invaders. 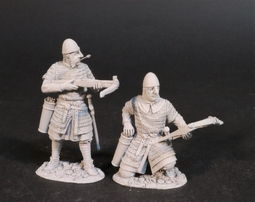 In the battles between the Anglo-Saxons and the Danes in England, most of the Saxon army would have consisted of the inexperienced Fyrd, which was a militia composed of free peasants. The shield wall tactic suited such soldiers, as it did not require extraordinary skill, being essentially a shoving and fencing match with weapons.

The front ranks would have been made up of select warriors, such as Houscarls and Thegns, who carried heavier weapons and wore armour. However the vast majority of opponents in such battles were armed with spears, which they used against the unprotected legs or faces of their opponents. Often soldiers would use their weapons to support each other by stabbing and slashing to the left or the right, rather than just ahead. Short weapons such as the ubiquitous Seax, could also be used in the tight quarters of the wall.

Archery and thrown missiles were limited and occurred in opening stages of battles, but were rarely decisive to the outcome.

Relatively lightly trained fyrdmen gained morale from being shoulder-to-shoulder with their comrades, but often fled once this was compromised. Once the wall was breached, or the commander was lost, it could prove difficult or impossible to re-establish a defensive line, and panic usually set in among the defenders.

Although the importance of the cavalry in the Battle of Hastings signaled the end of the shield wall tactic, massed shield walls would continue to be employed right up to the end of the 12th Century, especially in areas that were unsuitable for large scale mounted warfare, such as Scandinavia, and Scotland.

Though there were attempts at outflanking or turning flanks there was basically an alarming absence of tactical sense. Once opposing shield walls collided it was merely might, determination and often numbers which decided the day, the loser generally suffering considerably in the rout. 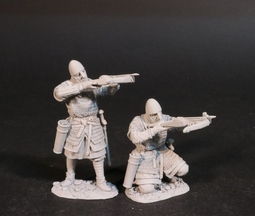 In the early Saxon period and as late as the 10th century it was regarded as a disgrace for retainers to leave the field of battle alive if their lord had been killed, unless the victory was theirs. Such men as did were declared "nithing" and no longer existed in the eyes of the law. The heavy slaughter of Vikings at Stamford Bridge in 1066 was probably a result of many of the Vikings resolution to die with their king.

Saxon battle-cries recorded by the 12th century historian Wace, which were supposed to have been used at Hastings were "Olicrosse" (Holy Cross), "Godamite" (God Almighty, and "Ut, Ut" (Out, Out). It is also recorded that there were two Saxon traditions when describing their battle formations. Whenever Kentish men accompanied the King in battle, theirs was the right to strike the first blow, and that it was also the right of Londoners to guard the King's person and standard.

There are 10 new Anglo Saxon shield wall figures, which should be available the second half of this year.

Three of these figures were previewed previously.

These new figures will be especially welcome to those who have recently started to collect this series.