Welcome to the March 1 edition, here we go back and visit El Cid and also the Jacobite Rebellion.

EL CID AND THE RECONQUISTA
THE SPANISH

The age in which El Cid lived has since been termed the "Reconquista", or Christian reconquest of Spain from the Moors, and was one of the most colourful periods in military history. The armies are spectacular and varied, ranging from the noble Christian Knights to the Muslim Andalusians, through to the religious zeal of the African invaders, the Almoravids and Almohads. Although the period is often portrayed as a simple war of religion, it was in fact a great deal more complex, with Muslim commonly fighting Muslim, and Christian fighting Christians, with both sides using allies and mercenaries whenever it suited them. This period, during the lifetime of El Cid 1040-1100AD saw the rise of heavy cavalry charges and other northern European influences, especially in the kingdoms of Aragon and Catalonia, which had the strongest links to France. This period involved two forms of campaign. The first involved raids of varying magnitude designed to seize valuables, livestock and prisoners. These expeditions were obviously carried out by mounted troops and were of limited duration. The longer campaigns had the intention to seize and hold territory. Naturally this involved more troops, especially infantry. The lack of a fully developed feudal system influenced the military organization of this period. Most soldiers were paid mercenaries, but fully armed citizen militias were formed to defend towns and major cities.

Infantry was especially common in larger campaigns, when the infantry militias would be mobilized to serve the king. The Spanish knights were particularly unhappy to fight dismounted,, therefore nearly all infantry were made up from the poorer citizens who could not afford a horse. 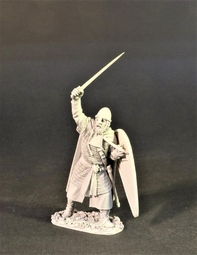 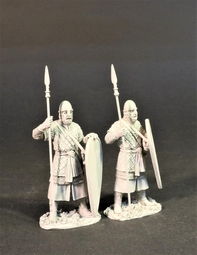 Nearly all the warring factions in Spain during this period used local Andalusian troops as allies in their armies. Andalusian mercenary infantry archers were commonplace and were often deployed behind spearmen in battle. 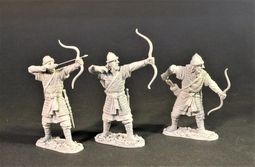 These figures are perfect as defenders of the Andalusian Castle, and will be available later this year.

It is argued that despite being depicted as horseless troopers standing forlornly in the rear at Culloden, the Jacobite cavalry were regarded when it came to scouting as superior to their regular opponents. All of the Jacobite cavalry units remained mounted throughout the campaign, except for Kilmarnock's and Lord Pitsligo's who turned their horses over to the newly arrived Fitzjames Cavallerie in March 1746, and were then re-organized as a regiment of foot guards. The cavalry, with the exception of the single troop of Hussars, were organized into two troops, and were over-officered to an even greater degree than the infantry. 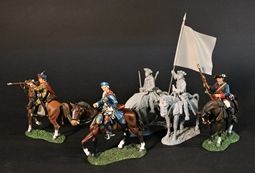 Charles had a mounted Lifeguard unit from early on in his campaign, it eventually grew to be one of the larger cavalry units. Most of the recruits were young men drawn from the "society" of Dundee and Edingburgh, with many being sons of gentlemen. One troop of around 100 men , was commanded by Lord Elcho, and another of 40 men by Balmerino.

Unlike nearly all the other Jacobite units, the Lifeguards had an elaborate formal uniform, which were blue coats with red facings, laced waistcoats and a tartan sword belt. 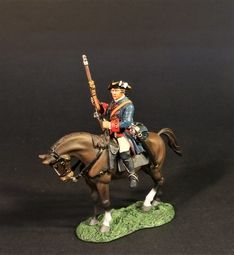 The blue coats turned with red, cocked hats and laced waistcoats as well as the famous tartan belts are based on a description contained in a letter written in Leith shortly after Culloden which stated that, "the pretender's lifeguard, have suffered greatly... 26 lying in heap with the lace cut of their coats and their tartan belts lying beside them'. The blue coats are believed to be of French origin, and had probably been some of the military supplies carried to Scotland on the "Le Du Teillay"

Tracing the movements of this unit at Culloden is complicated by the fact that while the greater number stood on the right under Lord Elcho, and helped defend that flank against Hawley's dragoons, another smaller troop led by Lord Balmerinoo may have served on the left wing brigaded with what remained of Lord Strathallan's Horse. Of course a small detachment formed part of the Pretender's bodyguard under the command of Captain Shea, an officer in Fitzjames's Horse. 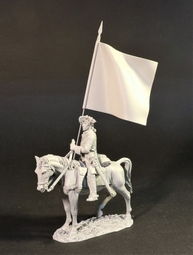 The Prince raised the Stuart standard at Glenfinnan, west of Fort William on the Scottish mainland, on 19th August 1745, which was the official signal that the Jacobite rising had begun.

A single troop of 50 men raised in Edingburgh by John Murray of Broughton and officered by a group of Lothian gentry, were designated as Hussars. It is unclear why they were designated hussars a role until then unknown in Britain. Their clothing included a fur-trimmed hussar cap of obsolete French pattern. These caps were an obsolete style once worn by hussars in the French army, and were probably brought over from France, along with the Lifeguard blue coats. As Murray of Broughton served on Charles' staff, the hussars were led by Captain George Hamilton of Redhouse until his capture at Clifton.

Bagot originally an officer in French service recognized that the unit would be ineffective in open battle and instead trained them to operate as light cavalry in the continental manner, and earned the respect of Cumberland's cavalry as a proficient reconnaissance unit. 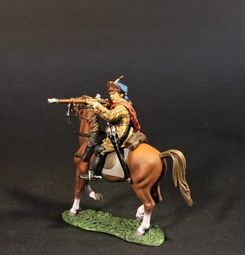 In keeping with the rest of the Highland army, most Jacobite cavalry were dressed in Highland clothes of some description. The depiction of the Bagots's Hussars in their distinctive tartan coats and fur caps is based on the Pencuik drawings, and James Ray's description in his contemporary history of the Rebellion where he describes them as wearing "Plaid coats and huge fur caps". Most Jacobite cavalry were armed with a firelock, which reflected their primary role as a scout and skirmisher.

During the battle of Culloden, the Hussars were positioned on the left wing, but a volunteer from the Lifeguards named John Daniel mentions they were later moved to the centre, where they suffered heavy casualties. As they only numbered 26 troopers at the start of the battle, it is believed that at least half their strength was lost. One of the casualties was the unit's commanding officer, Major John Bagot, a regular officer in the French service, who was badly wounded.

The first of the new Jacobite mounted troops will be available in April 2022.