Design of the Panzer I began in 1932 and mass production proceeded in 1934. Intended only as a training tank to introduce the concept of armoured warfare to the German army, the Panzer I saw combat in Spain during the Spanish Civil War, in Poland, France, the Soviet Union and North Africa during the Second World War.

Experiences with the Panzer I during the Spanish Civil War helped shape the German Panzerwaffe's invasion of Poland in 1939, and France in 1940.

The Panzer I's performance in armoured combat was limited by its thin armour and light armament of two machine guns, which were never intended for use against armoured targets, rather , being ideal for infantry suppression, in line with inter-war doctrine. Although lacking in armoured combat as a tank, it formed a large part of Germany's mechanized forces and was used in all major campaigns between September 1939, and December 1941, where it still performed much useful service against entrenched infantry and other 'soft' targets, which were vulnerable to machine gun fire.

Although it was quickly surpassed by more powerful successors, the Panzer I's contribution to the early victories of Nazi Germany during WW 2 was significant.

In September 1939, fifty one Panzer I Ausf. A light tanks were removed from service and transformed by Krupp and Daimler into ammunition supply vehicles. These were intended to equip the panzer regiments front line tanks, with suitably adapted vehicles for supplying ammunition when possibly under fire. These initial conversions involved removing the turret and providing a two-piece armour plate cover over the resulting opening. These crude conversions mainly served in Poland and France with Panzer units.

In the spring of 1942, most of the surviving and already obsolete model I tanks were converted into load and ammunition supply vehicles. For that purpose, plates were welded onto the superstructure replacing the turret, making a quadrangular box that could be covered by canvas for transport. A few months later in early 1943 the order was given to transform all the remaining panzers into ammunition carrier tractors.

These vehicles had their turrets removed and many of these turrets were used to arm bunkers and permanent strongholds, particularly on the Atlantic Wall. 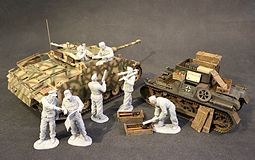 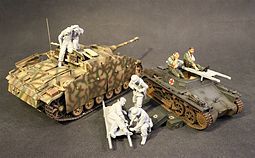 As the war progressed new types of more modern and efficient combat vehicles were developed and built. The Panzer I's quickly became obsolete and were relegated to secondary roles, both at the front and the rearguard.

The Panzer I was used as a medical tank for casualty evacuation for the panzer units on the front. These tanks had no armament at all, with the turrets removed, and white circles with a red cross in the middle were painted on the sides and rear, to denote their assignement to frontline medical platoons. 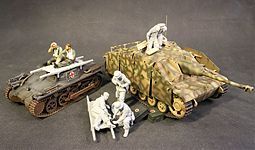 As illustrated in the attached pictures, there are some crews in the pipeline for the previously released STUG's, as well as two new Panzer I variants.

Unfortunately the truth of the matter is that every other series I produce sells better than WW 2, although I hope all these support crews, and vehicles, will be available before the end of this year.