DRUMS ALONG THE MOHAWK THE BATTLE OF SARATOGA 1777

"The surrender that changed the world".

In October 1777, a 6,000 strong British army surrendered in defeat after the American victory at the Battles of Saratoga.

Burgoyne's strategy to divide New England from the southern colonies had started well but slowed due to logistical problems. He won a small tactical victory over General Horatio Gates and the Continental Army in the September 19 Battle of Freeman's Farm at the cost of significant casualties. 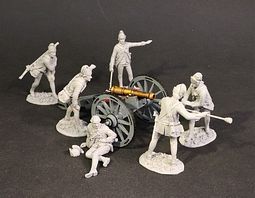 The Royal Artillery had always had a reputation for skill and competence, and its service during this war was exemplorary. During the investment of Fort Ticonderoga in 1777, when told by Burgoyne that it was impossible to place a battery of artillery on Mount Defiance, the artillery officer William Phillips replied , "where a goat can go a man can go. Where a man can go he can drag a gun".

The fate of the Royal Artillery detachment under second lieutenant James Hadden at Freeman's Farm illustrates the heavy losses inflicted on British officers and gun crews by American marksmen throughout the campaign. Hadden's two light 6pdrs covered the angle formed by the refusal of the two left companies of the 62nd Foot, which was being attacked from front, flank and rear.

By about 16.00, only Hadden and three of his 22 men were not killed or wounded. After requesting help to man his guns, during which a bullet went through the front of his cap, Hadden was joined by the senior artillery officer with Hamilton's brigade, Captain Thomas Jones. Within minutes Jones and the 11 men with him had also fallen, and it wasn't long before the Americans overran the guns. 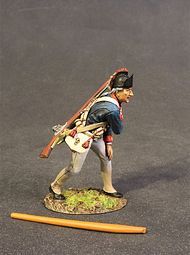 The standard field piece of the period was the British light 6-pounder, used by both sides. It was an excellent weapon with a sturdy and effective carriage. It was pulled by horses in tandem harnessed to a limber that moved the gun effectively. The horses and drivers were hired civilians, which could pose a problem, as they usually didn't like getting shot at and might take "French leave" and abandon the gun and its crew when they were needed most. This unsatisfactory situation was not remedied until 1794, when the artillery train was militarized. Crew drill was performed like a military ballet. A well drilled crew could deliver two aimed rounds a minute, and more per minute for short periods of time, such as in an emergency. Artillerymen were usually big men picked for intelligence as well as strength, and they were considered elite troops. 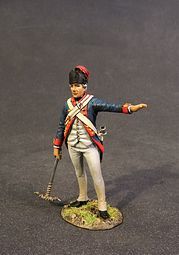 The Royal Artillery were uniformed in dark blue and faced red. During Burgoyne's expedition in 1777, wore a light infantry style cap. 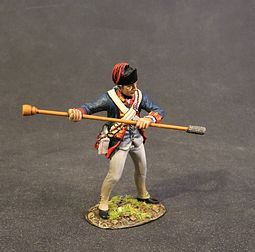 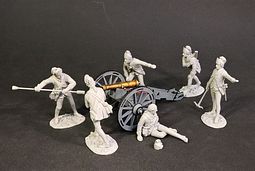 I would like to clarify that the figures for both the Roman and Carthaginian warships will start to be available from August 2020. Please note these figures will have wooden planked bases to match the decks of the Warships