Welcome to the Thursday / Friday Update. This will be Parts 4 and 5, showing a step-by-step process to making a Fur Trading Post. We hope you have this all constructed by the end of the weekend. 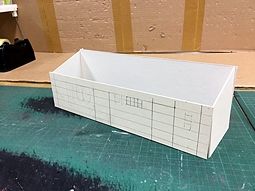 After completing the Stockade, Gateway, and bastion pieces, it was time to start on the main building.

Just as I had wanted the Stockade to be similar to the Eastern Woodland Village stockade, I felt it was important that the log constructed building be made in a similar way and style to the previously released Log cabin, and Rangers Huts. 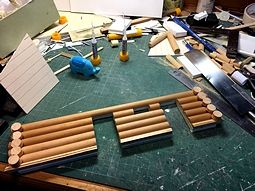 Once again, I start with a rough mock up of the dimensions of the building.

This time allowing for the thickness of the log walls.

I also decided not to make a three-unit building, as in the Snake River Fort reference, but to make the building two units.

This would represent a living area, and a larger storehouse area. This seemed to me to be a more interesting structure, and I felt it could be used alone as a Fur Trading House, for those who didn't have room for a full stockade. 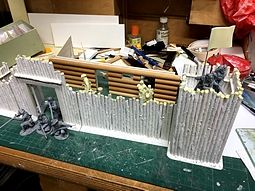 Using half inch, half round dowelling, which comes in 6-8 foot strips from your better hardware stores, I cut lengths to size to fit the outside of the building. I also bought some half inch Round dowelling to cut up for the ends of the logs. 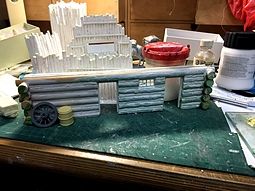 At this point, I decided to take a break, and dig out some of the WSP figures and "play"!

Its important to remember these are not scale models, but diorama pieces to accompany and enhance the figures.

I did consider at this point adding some loopholes in the stockade fence so some firing figures could be positioned inside shooting, but decided against this.

I did add a flag to the bastion! 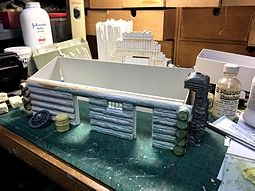 After a coffee and some playtime, its back to perhaps the most time-consuming part of the project.

To simulate the mud cladding used to fill the gaps between the logs I use a clay filler. This is easily applied using a large sculpting tool.

The clay filler, "DAZ" is easily found at most craft and modelling stores.

Once the cladding is dry, I then start to add the finishing touches by texturing the bark of the buildings' logs.

I use a two-part sculpting material, called "Green Stuff" and apply this along the wooden logs.

If you drag it along with a finger, roughly, once again applying it in the direction of the grain, half the work is already done for you.

Using a sculpting tool I then sculpt wood grain lines into the green stuff. 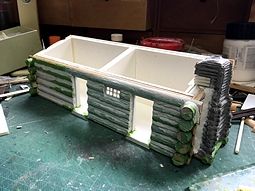 The window was made using thin styrene strips, and glued into place.

To save some time, I used a chimney, I had made previously from the Ranger Huts, and adapted it to fit into the side of the building.

I then added some 1/4 inch Foamcore card to thicken the walls, and added a floor.

Now there is only the roof and doors to add, and the Storehouse and all the stockade items will be complete.

The window was made using thin styrene strips, and glued into place. 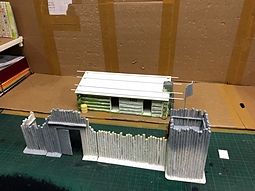 The final stretch was to make the roof and doors for the Storehouse.

I next added some strips of masking tape around each piece of wire. This is done so that the texture paste and paint, which is added next, adhere to the wire/plastic better. 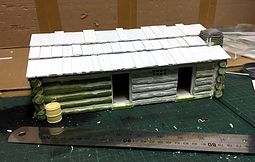 Using 1.6mm styrene I cut and assembled the sections of the roof.

Styrene is a soft plastic and easy to score and carve into.

This takes a while, but is worth doing. 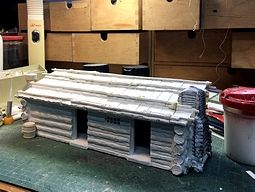 With some extra coat hangers, I prepared some longer strips to use for the roof. I wanted to create a similar style roof to the previous log cabin and Rangers Huts. 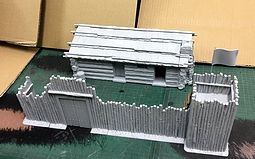 Doors were added, and hinged in a similar style to the Ranger Hut and Log cabins. 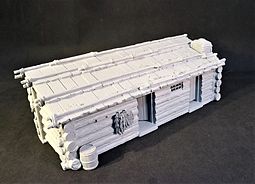 I added some rocks and earth texture on the roof, as well as some fur bits and bobs on the outside wall of the storehouse.

The final pieces are then sprayed with a grey primer paint.

This lets me see any irregularities in the sculpting, or mistakes.

The models are then shipped off to the factory, where they will make resin/polystone copies for me to produce a paint master.