THE FUR TRADE
THE CROW

The Crow, called the Apsaalooke in their own Siouan language, or variants including the Absaroka, are Native Americans, who in historical times lived in the Yellowstone River valley, which extends from present-day Wyoming, through Montana and into North Dakota, where it joins the Missouri River.

Pressured by the Ojibwe and Cree peoples (the Iron Confederacy), who had earlier and better access to guns through the fur trade, the Crow had migrated to this area from the Ohio Eastern Woodland area of present-day Ohio, settling south of Lake Winnipeg. From there, they were pushed to the west by the Cheyenne. Both the Crow and the Cheyenne were pushed farther west by the Lakota (Sioux), who took over the territory west of the Missouri River, reaching past the Black Hills of South Dakota to the Big Horn Mountains of Wyoming and Montana. The Cheyenne eventually became allies of the Lakota, as they sought to expel European Americans from the area. The Crow remained bitter enemies of both the Sioux and Cheyenne. 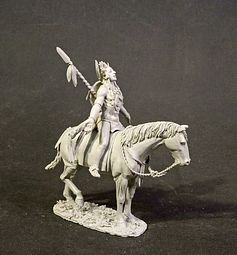 The first figure for "The Fur Trade" series was previewed at the Chicago Toy Soldier Show in 2018. It was finally released a year later in 2019!

It can be a little bit of a curse previewing items, and it does add a great deal of pressure, especially under these challenging times.

On the other hand it does help gauge the interest in projects that are in development.

Although this series has progressed slowly it has become one of my favourites to work on.

This range was originally called, "Whisky, scalps and Beaver Pelts", and is now called "The Fur Trade" but it is still a series fundamentally divided into three parts.

A mountain man was an explorer who lived in the wilderness. They were instrumental in opening up the various Emigrant Trails (widened into wagon roads) allowing Americans in the east to settle the new territories of the far west by organized wagon trains traveling over roads explored and in many cases, physically improved by the mountain men and the big fur companies originally to serve the mule train based inland fur trade. 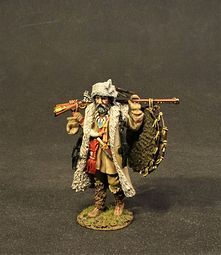 Mountain men were most common in the North American Rocky Mountains from about 1810 through to the 1880s (with a peak population in the early 1840s). Approximately 3,000 mountain men ranged the mountains between 1820 and 1840, the peak beaver-harvesting period. While there were many free trappers, most mountain men were employed by major fur companies. The life of a company man was almost militarized. The men had mess groups, hunted and trapped in brigades and always reported to the head of the trapping party.

This man was called a "boosway", a bastardization of the French term bourgeois. He was the leader of the brigade and the head trader.

The Mountain men represents the "Beaver Pelts" of the original WSP title, and is the smallest part of the series, as it mainly concentrates on the individual men and personalities that worked alone or in pairs in the mountain wilderness.

The Rendezvous was an annual gathering, at various locations held by a fur trading company at which trappers and mountain men sold their furs and hides and replenished their supplies.

The large fur companies put together teamster driven mule trains which packed in whiskey and supplies into a pre-announced location each spring/summer and set up a trading fair- the Rendezvous. 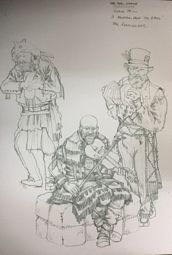 These Rendezvous were known to be lively, joyous places, where all were welcome, fur trappers, Indians, native trapper wives, and children, travellers and later on even tourists who would venture from as far as Europe to observe the festivities.

They were described as events "full of myrth, songs, dancing, shouting, trading, running, singing, racing, target-shooting, yarns, frolics, with all sorts of extravagances that white men or Indians could invent!"

This "Whisky" inspired section, should be a whole load of fun, as it will include trading and drinking scenes, set around the trading post, "Fort Whoop-Up"!, and as you can see from the concept drawing the band is already getting back together!

Fort Whoop-UP,(originally Fort Hamilton) was the official name given to a trading post, near what is now Lethbridge, Alberta. During the 19th Century the post served as a centre for trading activities, including the illegal trade of whisky.

TROUBLE WITH A CAPITAL "T"

It wasn't all a time of fun and games, and life as a mountain man/trapper was always dangerous.

The main tribe that trappers clashed with on a regular basis were the Blackfoot Indians.

The Blackfoot continually fought with the trappers, attempting time and again to drive them out of their territory at every opportunity. 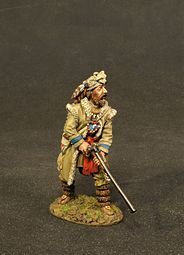 The "Scalps" part of WSP, will represent a skirmish between a Trapper Brigade, and a war party of Blackfoot Indians, the Centrepiece of which will be a "Keel Boat" similar to the boat which was used in the opening scene of the 2015 movie, "The Revenant." 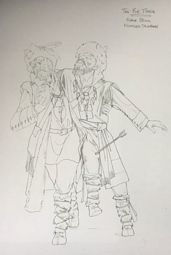 I thank you all for your continued patience, but there should be some new editions to this series in the next few months..