KNIGHTS OF THE SKIES
ROLAND CIIa AND CREW

The LFG Roland C.II, usually known as the Walfisch (Whale), was an advanced German reconnaissance aircraft of World War I. It was manufactured by Luft-Fahrzeug-Gesellschaft G.m.b.H. LFG, later changed their name to Roland to avoid confusion with LVG (Luft-Verkehrs-Gesellschaft).

They were responsible for some of the most aerodynamic and innovative aircraft designs of the Great War. The "Walfisch" was designed as aerodynamically as possible at the time, which resulted in a smooth fuselage featuring many compound curves and mounting the top wings to the fuselage to avoid drag from the struts.

The C.II had much lower drag than comparable aircraft of its time. It featured a monocoque fuselage built with an outer skin of two layers of thin plywood strips at an angle to each other (known as a Wickelrumpf, or "wrapped body" design)

This had both lower drag and better strength per weight than typical aircraft of the time, but it was relatively slow and expensive to build. (This approach was further developed in the de Havilland Mosquito of World War II.) The deep fuselage completely filled the vertical gap between the wing panel center sections, eliminating any need for cabane struts commonly used in biplanes, and gave the aircraft its "whale" nickname. Struts and wires were reduced, without suffering the weight penalty of cantilever wings, like those used on the pioneering all-metal Junkers J 1 of late 1915. There was even some attempt to flair the wings into the fuselage, to eliminate dead air space, a feature prominently missing from the Schneider Trophy contestants of the following decade. The engineer in charge of the design was Tantzen, who was a student of Ludwig Prandtl, the founder of mathematical aerodynamics and the one to introduce the concept of boundary layer. 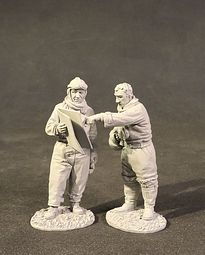 As well as the two crewmen discussing their flight plan, in the pipeline are also two action crew for the plane. These will be sold separately, and will be suitable for the ACE-50 as well as the new 'fishscale' version. 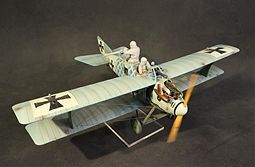 The C.II entered service in the spring of 1916. Operationally, handling was reported as difficult but performance was relatively good. Due to the crew positions with eyes above the upper wing, upward visibility was excellent, but downward visibility was poor. It was also used in a fighter escort role and had a crew of two, pilot and observer/gunner.

Because of its speed, when it was first introduced, it could be intercepted only from above. Because of the lack of downward visibility, it was best attacked by diving below and coming up at it

Albert Ball, whose first victim was a C.II, said in the latter half of 1916 that it was "the best German machine now".

It was flown by a number of famous German aces including The Red Baron,, Manfred Von Richthofen. 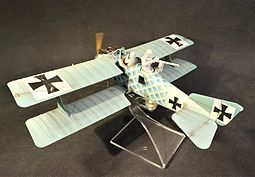 This will be the second jjdesigns version of the Roland CIIa.

The "fish scale" decoration is probably the most iconic paint scheme for this model, as it echo's its "Walfisch" nickname.

The previous Roland CIIa (ACE-50), was the last Knights of the Skies release, and this was over two years ago in June 2018!

The increasing production costs, as well as a change in the Hong Kong postal service package sizes have meant I have had to re-think how to proceed with releases.

We have been busy, two of the older models have now been re-tooled and I hope to be able to release new versions as well as a few old favourites in the next six months. 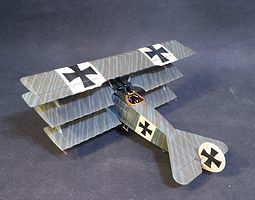 This new re-tooled Fokker Dr 1 was especially requested by Al (Lancer), and will probably be one of the first new Knights of The Skies models to be released. 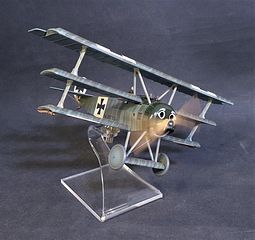 2021 will see the release of at least two new allied planes.