Roman Marching camps were used to protect an army while away from a permanent base during a campaign or when conducting other military operations.

These camps were constructed by the Romans at the end of a day of marching or conducting other exercises in the field.

At the conclusion of each day's march, legionary troops on the move were assembled at a site carefully selected at the day's start. For the next three hours or more, they were put to work digging a perimeter ditch, erecting a rampart, and assembling a palisade with prefabricated materials. Polybius wrote that the standard Republican-era design was in the shape of a square, but always had to conform to the lay of the land and the numbers of men and animals to be quartered in the camp.

Vegetius wrote that the camps should be constructed taking into account the configuration of the ground. He warned that a secure marching-camp must be placed near a source of plentiful water, wood, and forage and not be overlooked by higher ground.

The outline of the camp was usually marked by a ditch, with the resulting spoil used to make a rampart thrown up on the camp's inner edge. This was then reinforced with earthen sod and strengthened by stakes carried by the troops.

When a camp was being constructed out of reach of an enemy, the entire force, except for a small picket, would participate in the building process. When the enemy was near at hand, the precaution was that half the infantry and all the cavalry would be drawn up in battle order to guard the workers building the camp. The first legion on the scene would take up defensive positions and the actual work on the camp would not begin until the arrival of the next legion in the line of march.

The 8-10 man tent of the Roman Legions were made from goat and calf skin.

Almost all references state that 1/4 of the soldiers would have been on watch at any given time, so that the tent would only have to sleep either 6 or 8 men.

Romans used carriages. The carpentum was the bus or limousine of wealthy Romans. It had four wheels, a wooden arched rooftop and was pretty comfortable, spacious and nicely decorated inside.

The carpentum had some kind of suspension and metal and leather straps which made the ride more comfortable. 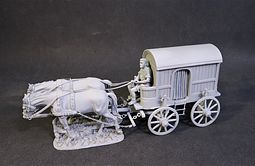 Roman carriages had iron-shod wheels (they did not have rubber then) which means that they made a lot of noise!

Apparently carriages were forbidden in big cities such as Rome during the day, therefore residents had to bear the sound of their wheels at night.

Roman surveyors (Agrimensores) used a groma for laying out roads, buildings and aqueducts.

A groma consisted of a metal drive point attached to the bottom of a pole. A swivel arm extended from the top of the pole. Attached to the end of the swivel arm was a cross made with two boards that could be rotated in a circle. Extending down from the center point of the cross was a plumb line with a plumb bob. The groma was installed in the ground such that the plumb line extending down from the center point of the rotating cross was directly over the survey marker on the ground. Attached to the ends of the boards that formed the cross were plumb lines. To survey a straight line from the survey marker, the Agrimensore would position the groma over the survey mark then rotate the cross to align two of the plumb lines at the end of the wooden cross with the center plumb line. He would then sight along the three aligned plumb lines to survey poles moved into alignment by assistants. The survey line would be extended by moving the groma to one of aligned pole positions and repeating the procedure. 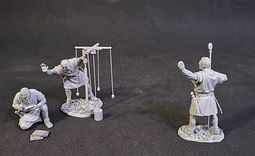 The Roman army of the mid-Republic (also known as the manipular Roman army or the "Polybian army"), refers to the armed forces deployed by the mid-Roman Republic, from the end of the Samnite Wars (290 BC) to the end of the Social War (88 BC). The first phase of this army, in its manipular structure (290-ca. 130 BC), is described in detail in the Histories of the ancient Greek historian Polybius, writing before 146 BC.

The central feature of the mid-Republican army was the manipular organisation of its battle-line. Instead of a single, large mass (the phalanx) as in the Greek and Early Roman army, the Romans now drew up in three lines, consisting of small units (maniples) of 120 men, arrayed in chessboard fashion, giving much greater tactical strength and flexibility.

The velites would gather at the front, and cover the advance of the hastati. If the hastati failed to break the enemy, they would fall back on the Principes. If the principes could not break them then they would retire behind the Triarii.

This order of battle was almost always followed. It was Scipio Africanus at the Battle of The Great Plains, and the Battle of Zama, who modified this tactic.

In the Roman infantry, the centurions initially commanded a Centuria or 'century'. In the Republican Roman legions each Maniple of 120 men was commanded by a centurion.

A Signifer was a standard bearer of the Roman Legions. He carried a signum(standard). Each maniple had a signifier.

The cornu was carried by the cornicen (horn blower) who relayed the general's orders into signals and broadcast them over the field during battles. 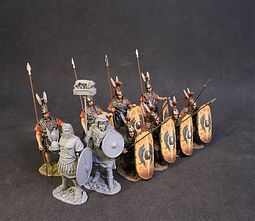 For set-piece battles, the heavy infantry were usually drawn up in three lines.

However, the vast majority of the heavy infantry were stationed in the front two lines, the HASTATI and PRINCIPES. Contained in these two lines were the younger recruits who were expected to do all the fighting. The rear line (TRIARII), was a reserve consisting of older men who formed a line of last resort to provide cover for the front lines if they were put to flight (and also to prevent unauthorised retreat by the front ranks). 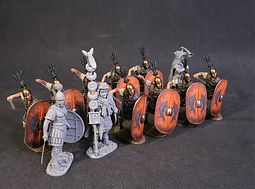 The Principes (singular princeps) were originally men in the prime of their lives , who were also fairly wealthy, and could therefore afford decent equipment. These were the heavier infantry of the legion, and their usual position was the second battle line. By the time of the Punic wars infantry were sorted into classes according to age and experience rather than wealth. The Principes then became the older veterans but their equipment and role remained the same. 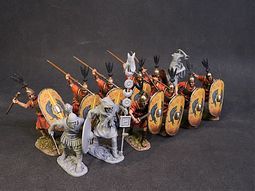 Hastati (singular: Hastatus) were a class of infantry employed in the armies of the early and Mid Roman Republic.

They were originally some of the poorest men in the legion, and could afford only modest equipment. Later, the hastati contained the younger men rather than just the poorer, (though most men of their age were relatively poor.) Their usual position was the first battle line.

Finally managed to get a picture with most of the figures for the Warships. There are still several figures to be included, but most should be released before the end of this year.