Welcome to the July edition #1, here we visit Powtoon Indians and the battle for Henry House Hill. The first battle of the Civil War

THE CONQUEST OF AMERICA
THE POWHATAN 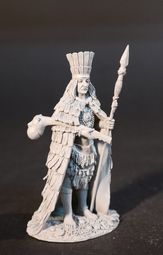 In the late 16th and early 17th centuries, a "Mamanatowick" (paramount chief) named Wahunsenacawh created an organization by affiliating 30 tributary peoples, whose territory was much of eastern Virginia. They called this area Tsenacommacah ("densely inhabited land").

Wahunsenacawh came to be known by English colonists as "The Powhatan Chief". Each of the tribes within this organization had its own Weroance (leader), but all paid tribute to the Powhatan Chief. 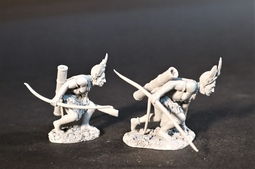 After Wahunsenacawh's death in 1618, hostilities with colonists escalated under the chiefdom of his brother, Opchanacanough, who sought in vain to expel encroaching English colonists. His large scale attacks in 1622 and 1644 met strong reprisals by the colonists, resulting in near elimination of the tribe.

By 1646, what is called the Powhattan Paramount Chiefdom by modern historians had been decimated.

More important than the ongoing conflicts with the English colonial settlements was the high rate of deaths the Powhattan suffered due to new infectious diseases carried to North America by Europeans, such as measles and smallpox. The native Americans did not have any immunity to these, which had been endemic in Europe and Asia for centuries. The wholesale deaths greatly weakened and hollowed out the native American societies. 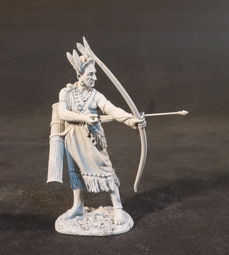 By the mid-17th century, the leaders of the colony were desperate for labor to develop the land. Almost half of the European immigrants to Virginia arrived as indentured servants.

As settlements continued, the colonists imported growing numbers of enslaved Africans for labour.

By 1700 the colonies had about 6,000 black slaves, which was one-twelfth of the population. 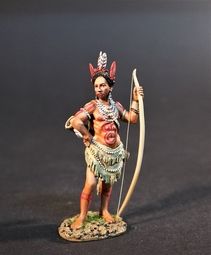 There are several detailed accounts of the Powhatan peoples, but we are fortunate to have the exquisite water-colours of John White, who was the governor of the second Roanoke Settlement. Luck would have it he was gathering supplies in England when his colony vanished.

The main weapon of all the Indians faced by the English settlers during this period was the longbow. This measured 5-6ft. and was made from witch-hazel or hickory. It was noted that the Indian bows were quick, but not very strong or accurate.

The first of the Powhatans should be available towards the end of this year.

During the early action on Henry House Hill, two batteries were ordered to advance to a position near to the Henry House. These were batteries of the regular US army, efficient and well commanded. Both these batteries had been actively engaged from the very beginning of the battle.

The batteries were commanded by Captain James Ricketts, and Captain Charles Griffin.

It is believed McDowell made a serious tactical error in giving the order for the batteries to advance up the hill. They were told that the 11th New York Regiment were on their way to support the advance. 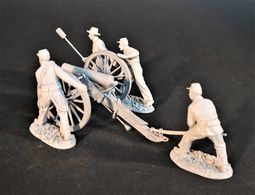 The southern cause was helped by a case of mistaken identity. Colonel Arthur C. Cummings's 33rd Virginia Regiment wore blue uniforms. The Colonel afraid his men would break and run if they were held in their position any longer, ordered them to advance towards the guns of Ricketts and Griffin.

Griffin saw them coming and swung two of his guns round and had them loaded with cannister. Just as he was about to fire, his superior officer, Major William F. Barry, shouted , "Captain, don't fire there; those are your battery support."

"They are Confederates" Griffin shouted back, as certain as the world, they are Confederates." But Barry insisted, and the guns were swung back to their original line of fire. The Virginians, meanwhile marched ever closer, halted and fired a volley. Griffin told a subsequent Board of Inquiry, "was the last of us, We were all cut down." Most of the horses and many of the gunners were killed. Ricketts was severely wounded. Griffin struggled to save what he could, but Cummings and his Virginians were among them quickly to capture the guns and much ammunition. 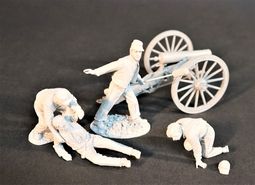 McDowell was not prepared to lose his guns. Two regiments of Franklin's Brigade, from Massachusetts were ordered to retake the guns, which they succeded in achieving.

Jackson's Virginians then drove back the Massachusetts regiments in a counter attack. The battle for the guns continued as the 1st Minnesota Regiment drove the Virginians back yet again.

After yet another charge by Jackson's Virginians, the 1st Michigan under the command of General Orlando Bolivar Willcox re-took the guns. The 1st Michigan remained in the thick of the action, progressing further into the Confederate lines than any other Union regiment. Willcox himself was wounded, and then captured, as he ran towards a line of men in blue uniforms to tell them they were firing on friends, discovering too late that they were the enemy.