The 1st Virginia Cavalry completed its organization at Winchester, Virginia in July 1861, under the command of Colonel James Ewell Brown (J.E.B.) Stuart at the command of Thomas Jackson. Unlike most regiments the First contained twelve companies. 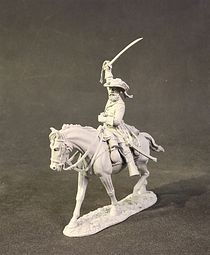 James Ewell Brown "JEB" Stuart (February 6th 1833 - May 12th 1864) known to his friends as "Jeb" from the initials of his given names. Stuart was a cavalry commander known for his mastery of reconnaissance and the use of cavalry in support of offensive operations.

Stuart was initially commissioned as a lieutenant colonel of Virginia infantry in the Confederate army on May 10th 1861. After being ordered to report to Thomas J. Jackson at Harper's Ferry, Jackson assigned him on July 4th to command all the cavalry companies of the Army of the Shenandoah, organized as the 1st Virginia Cavalry Regiment. He was promoted to colonel on July 16th. 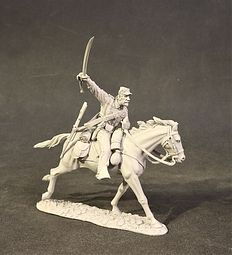 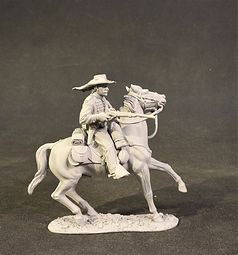 The 11th New York Regiment , in their bright red shirts had been ordered to move up Henry House Hill, to support the Union artillery. The Southerners held their fire until the zouaves were at the plateau of the hill, then let them have a thunderous volley. The Zouaves found themselves pinned down in a hail of fire. Two companies on their right pulled back down the hill, escaping the rife fire, but running into Jeb Stuart's cavalrymen, who charged among them, slashing with sabres and firing their carbines.

The clash between the Union Regiment, and J.E.B Stuart's 1st Virginia cavalry was a brief but significant skirmish.

Jeb Stuarts cavalry were to disperse the 11th New York Regiment, which was one of the main factors which led to the union line breaking.

This early engagement became popular amongst artists, and reporters dubbed the Virginians, as "The Black Horse Cavalry", and under the inspiring leadership of Stuart and Fitzhugh Lee, they were to become one of the crack mounted outfits of the Confederate service. 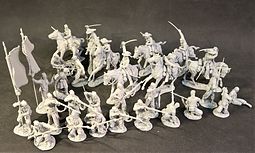