This week we visit the Second World War and introduce the latest aircraft from John, the Hellcat. Do not have a production date just yet. 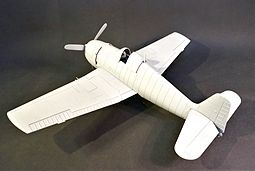 The Grumman F6F Hellcat is an American carrier-based fighter aircraft of the second World War. It was designed to replace the earlier F4F Wildcat and to counter the Japanese Mitsubishi A6M Zero..

It was the United States Navy's dominant fighter in the second half of the Pacific War, out dueling the faster Vought F4U Corsair, which had problems with carrier landings.

Although it resembled the Wildcat in many ways, it was an entirely new design, but for some military observers it was tagged the "Wildcat's big brother".

The F6F made its combat debut in September 1943, and was best known for its role as a rugged well designed carrier fighter, which was able to outperform the A6M Zero and help secure air superiority over the Pacific theatre. A total of 12,275 were built in just over two years.

Hellcats were credited with destroying a total of 5,223 enemy aircraft while in service with the US Navy, US Marine Corps, and Royal Navy. This was more than any other Allied naval aircraft. 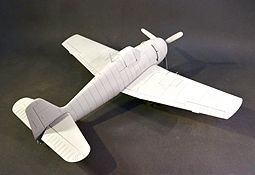 Grumman had been working on a successor to the F4F Wildcat since 1938 and the contract for the prototype XF6F-1 was signed on 30th June 1941. Instead of the Wildcat's narrow track hand cranked main landing gear retracting into the fuselage, little changed in design. The Hellcat had wide set, hydraulically actuated landing gear struts that rotated through 90 degrees while retracting backwards into the wings.

The wing was mounted lower on the fuselage and was able to be hydraulically or manually folded, with each panel outboard of the undercarriage bay folding backwards from pivoting on a specially orientated , Grumman patented "Sto-Wing" diagonal axis pivoting system with a folded stowage position parallel to the fuselage with the leading edges pointing diagonally down. 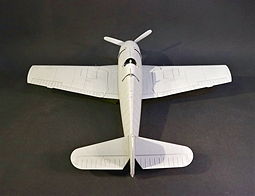 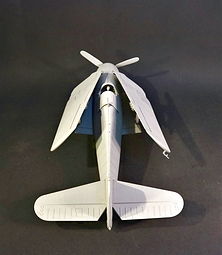 From their first introduction into combat in the summer of 1943 through August 15, 1945, U.S. Navy Hellcats shot down over 5,000 enemy aircraft, and over 300 Hellcat pilots achieved ace status while flying the airplane. Truly, it was an "ace maker". 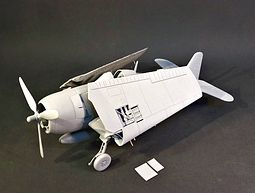 SOME NOTES FROM JOHN

This week there is a preview of a new model plane. The Hellcat will be a new addition to the Bunker Hill Aircraft Carrier Series.

These models, and any models with moving, or interchangeable parts are always time consuming to produce. Today thanks mainly to computer aided design we are able to progress not only more quickly but with a great deal more accuracy. It seems like only yesterday that these prototypes were all made by hand which was extremely challenging especially with the unforgiving characteristics of model planes. Dimensions, angles and even production mould shrinkage can now be calculated by computer programs.

Having originally worked in the special effects model making industry, its with mixed feelings that I have witnessed this technological change. However it has opened more doors from a creativity point of view, and we continue to learn, improve and find new materials and manufacturing techniques to help challenge us to bring new models to the collector.