For this New Year edition we visit three different worlds. We introduce Boadicca from Ancient Britain and move to the American Revolution and American Civil War with the 5th Virginia Infantry Regiment.

The concept sketch for the Boadicca figure was one of the drawings previewed in Decemeber as part of last years advent calendar posted on the JJD Collectors Facebook Group. A special thanks once again to Mike Estell. 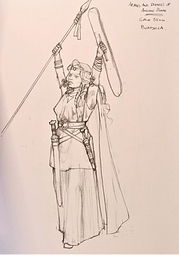 Boadicca, or Buddug in Welsh, was a queen of the British Iceni tribe who led an uprising against the conquering forces of the Roman Empire in AD 60/61. According to Roman sources, shortly after the uprising failed, she poisoned herself or died of her wounds, although there is no actual evidence of her fate. She is considered a British folk hero. 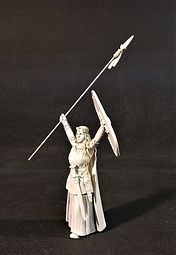 Boudicca's husband Prasutagus, with whom she had two children whose names are unknown, ruled as a nominally independent ally of Rome, and left his kingdom jointly to his daughters and to the Roman emperor in his will. However when he died his will was ignored, and the kingdom was annexed and his property taken. According to Tacitus, Boudicca was flogged and her daughters raped. Cassius Dio explains Boudicca's response by saying that previous imperial donations to influential Britons were confiscated and the Roman financier and philosopher Seneca called in the loans he had forced on the reluctant Celtic Britons.

In AD 60 or 61, when the Roman governor Gaius Suetonius Paulinus was campaigning on the island of Mona (modern Anglesey) on the northwest coast of Wales, Boudicca led the Iceni, the Trinovantes, and other tribes in revolt. They destroyed Camulodunum (modern Colchester), earlier the capital of the Trinovantes, but at that time a settlement for discharged Roman soldiers and site of a temple to the Emperor Claudius. Upon hearing of the revolt, Suetonius hurried to Londinium. The 20 year old commercial settlement was the rebels' next target. Lacking sufficient numbers to defend the settlement, he evacuated and abandoned Londinium. Boudicca led a very large army of Iceni, Trinovantes, and others against a detachment of the Legio IX Hispana, defeating them, and burning Londinium and Verulamium. 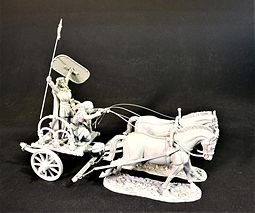 An estimated 70,000 - 80,000 Romans and Britons were killed in the three cities by those following Boudicca, many by torture. Suetonius, meanwhile regrouped his forces, and despite being heavily outnumbered, he decisively defeated the Britons. The crisis caused Nero to consider withdrawing all Roman forces from Britain, but Suetonius's victory over Boudicca confirmed Roman control of the province. Boudicca then either killed herself to avoid capture or died of illness. 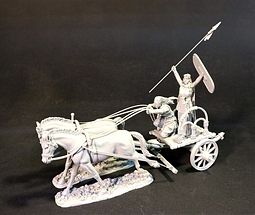 Interest in these events was revived in the English Renaissance and led to Boudicca's fame in the Victorian era. Boudicca has remained an important cultural symbol in the United Kingdom.

The Boudicca figure and chariot will be available later this summer.

Civil War regiments were usually made up of ten companies of about 50 men, each of which was designated by a letter between A and K (J not used). A regiment would be commanded by a Colonel and Lieutenant Colonel, and companies by captains.

Colonel Kenton Harper, was given command of the 5th Virginia Infantry regiment on May 7th 1861. Harper and the 5th Virginia fought well during the First Battle of Bull Run on July 21st 1861, "where his soldierly ability attracted the notice of the army commander". Harper was to resign from the Confederate Army on September 11th, because Jackson refused to allow Harper permission to return home where his wife lay dying.

One company that stood out the most were the Continental Morgan Guards. Its men wore blue coats and tri corn hats in exact imitation of George Washington's forces.

Company A was raised in Frederick County, Virginia, and wore a grey frock coat, with solid black collar, and three horizontal bands of black braid around the cuffs, which were fastened by three small buttons. Trousers were also grey with a black seam stripe. Headgear consisted of plain black felt hats with a narrow brim. 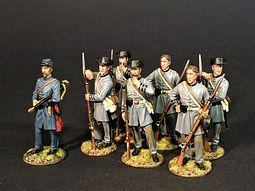 Organized at Staunton in the Shenandoah Valley in 1858, the West Augusta Guard, were nicknamed the "Wags", and wore a version of the state regulation uniform adapted during the same year. It consisted of a dark blue frock coat cut after US regulation pattern and fastened with gilt buttons bearing the Virginia state seal. Collar and cuffs were edged with sky blue piping. Trousers were also dark blue with sky blue seam stripes. Hardee hats had a yellow metal bugle insignia on the front, with the brim looped up on the left by a brass eagle device., and also a sky-blue worsted hat cord and tassle. There was a single black ostrich feather normally attached to the right side of the crown, but it is believed these were removed at First Bull Run because they believed that the "Yankees" wore the same. 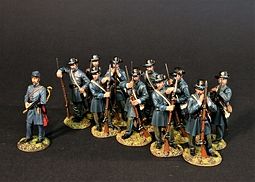 Captain William S. H. Baylor was the Company Commander, and later became the Colonel of the Regiment.

Although these regiments were made up of 10 companies where there was such a variety of uniforms, it was also quite common for there to be no uniform at all. To represent this there will be a handful of non-uniformed figures, ideal to represent a small company, to add variety, or simply to be used as picket guards. 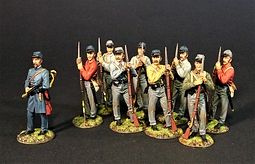 The ranks of these new companies were filled quickly and came from a variety of backgrounds and occupations, and ranging in age from teenagers to old timers. Most of them were either English or Scots-Irish by descent, with a good smattering of Irish, German and Swedish. Due to the local recruitment from the Shenendoah there was a widespread family element in the brigade, Many brothers and cousins, and even father and sons, joining up together. One company in the 5th Virginia listed 18 different members of a family called Bell (only 7 of whom survived the war).

About a third of the men were farmers, the area being predominantly agricultural. Most had grown up familiar with firearms, either for defence or to provide meat for the table. But it has also been said that the Valley's volunteers made up the most highly educated brigade in the civil war. This was due to the fact that the Shenendoah was prosperous, and many of the men had attended nearby Washington College, the Virginia Military Institute (VMI) in Lexington, or the University of Virginia in Charlottesville. General Joseph Johnston once commented that Jackson was "most fortunate in commanding the flower of the Virginia troops."

The 5th Virginia Infantry Regiment sets will be available this summer.