Welcome to the Feburary edition, here we go back to the early days of the American and Canadian West.

A mountain man was an explorer who lived in the wilderness. They were instrumental in opening up the various Emigrant Trails (widened into wagon roads) allowing Americans in the east to settle the new territories of the far west by organized wagon trains traveling over roads explored and in many cases, physically improved by the mountain men and the big fur companies originally to serve the mule train based inland fur trade.

Mountain men were most common in the North American Rocky Mountains from about 1810 through to the 1880s (with a peak population in the early 1840s). Approximately 3,000 mountain men ranged the mountains between 1820 and 1840, the peak beaver-harvesting period. While there were many free trappers, most mountain men were employed by major fur companies. The life of a company man was almost militarized. The men had mess groups, hunted and trapped in brigades and always reported to the head of the trapping party. This man was called a "boosway", a bastardization of the French term bourgeois. He was the leader of the brigade and the head trader.

The Rendezvous was an annual gathering, at various locations held by a fur trading company at which trappers and mountain men sold their furs and hides and replenished their supplies. The large fur companies put together teamster driven mule trains which packed in whiskey and supplies into a pre-announced location each spring/summer and set up a trading fair- the Rendezvous. 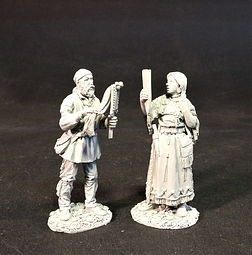 These Rendezvous were known to be lively, joyous places, where all were welcome, fur trappers, Indians, native trapper wives, and children, travellers and later on even tourists who would venture from as far as Europe to observe the festivities. 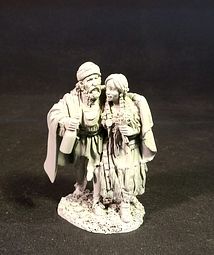 They were described as events "full of myrth, songs, dancing, shouting, trading, running, singing, racing, target-shooting, yarns, frolics, with all sorts of extravagances that white men or Indians could invent!" 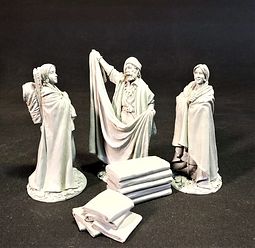 The Rendezvous section of the Fur Trade series should be a whole load of fun, as it will include trading and drinking scenes, set around the Fur trading post.

The JJD Fur Trading Post will be available later this year or early 2023. 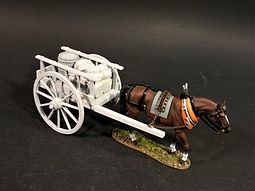 In production for 2022 will be the iconic "Red River Cart"!

The Red River cart was a large two-wheeled cart made entirely of non-metallic materials. These carts were often drawn by oxen, although also by horses or mules. The carts were used throughout most of the nineteenth century in the fur trade and in westward expansion in Canada and the United States, in the area of the Red river and on the plains west of the Red River Colony. The cart was a simple conveyance developed by the Metis for use in their settlement on the Red River in what later became Manitoba. With these carts, the Metis were not restricted to river travel to hunt bison. The Red River cart was largely responsible for commercializing the buffalo hunt. 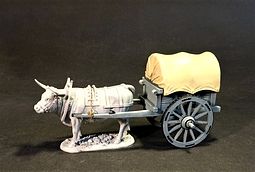 There will also be new horses and oxen which are conveniently designed to fit any of the other previously released eighteenth century wagons and carts. 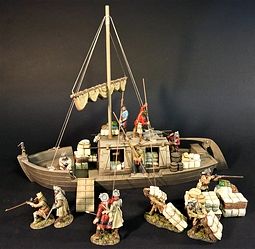 Finally! The JJD Keel Boat will be available with the March 2022 releases, along with the restock of many of the early Mountain Men figures the following month.