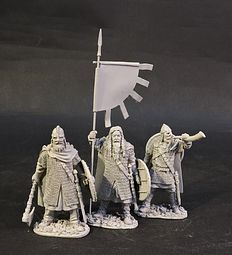 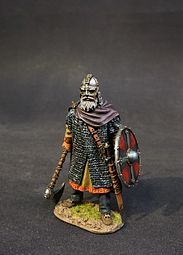 A Hersir was a local Viking military commander of approximately 100 men, who owed allegiance to a Jarl or a King.

Viking society was a chieftain or clan society. These Chieftains were landowners and similar to many feudal societies, supported the Kings in their centralization of power. A Chieftain society differs from a state in that it has no central government. Instead it is ruled by several, even many chieftains or lords, each of whom has his own domain of influence. 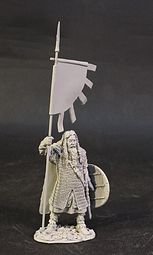 Viking society were split into many small clans, and every clan or Viking Chieftain would have had their own flag and symbols to identify their clan.

The Raven Banner was a flag, flown by various Viking chieftains and other Scandinavian rulers during the 9th-11th Centuries. The basic flag was roughly triangular, with a rounded outside edge on which were hung a series of tabs or tassles. It bore a resemblance to the ornate carved "weather-vanes" which were used aboard Viking longships.

It is said that the Raven Flag was a symbol of Odin, who was often depicted accompanied by two ravens named "Huginn" and "Muninn". The intent may have been to strike fear in the enemy by invoking the power of Odin. 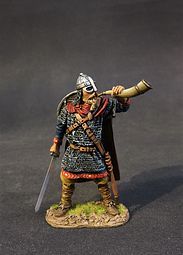 The "Gjallarhorn" has its origins in Norse mythology, where according to legend, it was sounded to announce the arrival of the gods. It was said that its "blast can be heard in all worlds", and the gods will awake and assemble together to fight the enemy.

With the arrival of the Vikings, it only seems appropriate that there will be some Anglo Saxon reinforcements!

The first Viking sets will be available in September. 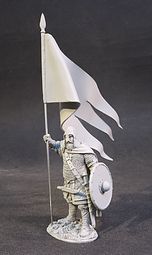