Welcome to the April edition #2, here we visit World War I and the Knights of the Skies. 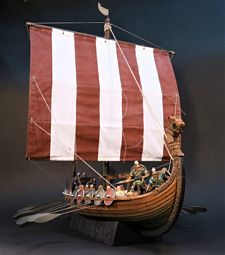 Thank you to all of you that Pre Ordered the Longship. It has been a huge success. It is now sold out, but we are opening a wait list in case of a last minute cancelletion or in case a collector wants to sell it in the futue.

The Viking Ship has been delayed until Mid to Late May. The ship is ready to go, but due to the Covid restrictions in China the area where these are produced is still locked down. So they cannot be shipped to Hong Kong. As the situation is rapidly changing, please watch for updates.

The first prototype of the Macchi M.5, flew for the first time in 1917 and was developed by engineers Buzio & Calzavera. Based directly on the previous Macchi M.3, it consisted on a single-step hull with an open cockpit placed forward on the wings, three more prototypes were tested, designated "Ma", "M bis" and "Ma bis" and the production version, finally was named as "M.5".

Like it's prototypes, it was powered by an Isotta-Fraschini 4Vb engine placed in a pusher configuration that could deliver 160hp of power. The first units were handed over to the Aviazione della Regia Marina (Aviation of the -Italian- Royal Navy) in the summer of 1917. A later sub-version was produced with redesigned wingtip floats and a more powerful engine, an Isotta-Fraschini V.6, placed also in the pusher configuration and delivering the respectable amount of 247hp of power. In total 244 of them were produced, 200 by Macchi itself and other 44 of them by Societa Aeronautica Italiana (SAI). 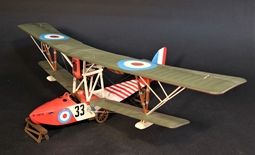 It was operated by the Royal Italian Navy's naval squadrons during The Great War with very satisfactory results. Some of them served also in the seaplane carrier Giuseppe Miraglia before they were scrapped after the creation of the Regia Aeronautica (Italian Royal Air Force) in the successive years 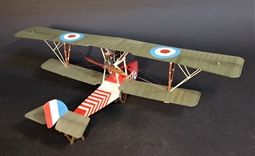 There was an improved late-production version with a better engine and redesigned wingtip floats, named M.5 mod.

It was flown by American pilots, as a trainer first and as an operational fighter later operating with the 263a Squadriglia (263th Squadron) from the Italian city of Porto Corsini, situated in the shores of the province of Ravenna. The first US Navy airman to be awarded with a Medal of Honor was piloting this airplane. On 21st August 1918 a Macchi M.8 piloted by Walther White and with Albert P. Taliaferro in the observer's position, was escorted by a flight of three Macchi M.5, in a leaflet-dropping mission over Pola, a city located in the Austro-Hungarian Empire's shores. When flying over the Adriatic, they were attacked by four Phonix land-based fighters. The Austro-Hungarian took down one of the Macchis, flown by the Ensign George Ludlow who could manage to ditch the plane at the sea. Seeing the life of his partner in risk, the pilot Charles Hamman landed his airplane close to Ludlow's one in order to take him on board. As Hamman's fighter was overloaded, he returned to base, where he crashed the airplane, however both pilots survived the crash. For that action Hamman was awarded the medal of Honor. Unfortunately, he died in a crash after the war, in June 1919 when he was piloting another Macchi.

As the Macchi had such good reputation, it comes no surprise that the Austro-Hungarians captured and used some of them, both of the M.5 and the M.5 mod version. 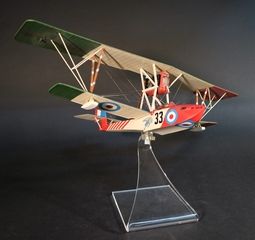 The Macchi M-5 should be available this summer.