Welcome to the December 2022 announcements.

For this set of announcements, we have a Sopwith Camel, Amazons, American Revolution, American Civil War and lots of other goodies. 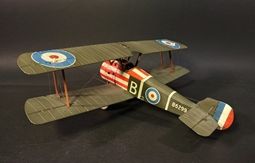 The Sopwith Camel was a British First World War single seat biplane fighter aircraft that was introduced on the western front in 1917. It was developed by the Sopwith Aviation Company as a successor to the Sopwith Pup and became one of the best known fighter aircraft of the Great War. The Camel was powered by a single rotary engine and was armed with twin synchronized Vickers machine guns. Although difficult to handle, it was highly manouverable in the hands of an experienced pilot, which was a vital attribute in the relatively low-speed, low altitude dogfights of the era.

In total Camel pilots have been credited with downing 1,294 enemy aircraft, more than any other Allied fighter of the conflict.

"Naval 10" was a famous unit long before the arrival of the Sopwith Camel, its pilots having been excepcionally succesful with the Sopwith Triplanes. Ray Collishaw's famous "Black Flight" was well known.

Norman Miers MacGregor was from London, and became an Ace flying with Naval 10 Squadron in late 1917. He claimed a Fokker triplane as his seventh score on 15th September, which was flown by German Ace, and leader of Jasta 11, Kurt Wolff who was a 33 victory Ace.

Flt. Lt. MacGregor gained his last two victories with this aircraft. The plane then briefly served with 9 Naval Squadron, before being passed on to a training depot at Chingford. Squadron markings were two vertical bars which encircled the fuselage. Flight markings were an A, B or C, and unusually in late 1917 three broad white horizontal bands were painted over a flight colour, black, red or blue, depending on the flight. This was only to last a month, before the white vertical bars would be replaced by a white circle aft of the roundel.

Knights Of The Skies - WWI 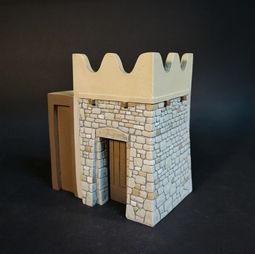 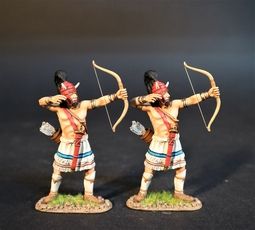 The Amazons were a race of female warriors in Greek mythology, who dwelt in the region of modern-day Ukraine. Two of the Amazon queens were Penthesilea, who took part in the Trojan War, and her sister Hippolyta, who was the owner of a magical girdle, given to her by the god of war Ares.

There were no men allowed to live together with the Amazons. However, in order to continue their race, once a year, the Amazons would visit a nearby tribe called Gargareans. After having sexual intercourse with them, the Amazons would return home; they would keep all baby girls that were born, but the male babies were either killed, sent to their fathers, or left in a forest to die of exposure to the elements.

The Amazons appeared in various Greek myths. In one of them, they attacked the region of Lycia, but were fended off by Bellerophon. They later attacked Phrygia, but were also defeated by the defending army, led by a young Priam, who later became the king of Troy.

According to Homer, the Trojan king Priam had fought the Amazons in his youth on the Sangarius river in Phrygia, some 350 miles east of Troy.

Later writers of the antiquity located Amazons geographically in Anatolia and started an epic tradition where Greek heroes, such as Heracles and Theseus, fought an Amazon warrior of distinction.

Courageous and fiercely independent, the Amazons, commanded by their queen, regularly undertook extensive military expeditions into the far corners of the world, from Scythia to Thrace, Asia Minor and the Aegean Islands, reaching as far as Arabia and Egypt.

Besides military raids, the Amazons are also associated with the foundation of temples and the establishment of numerous ancient cities, such as Ephesos, Cyme, Smyrna, Sinope, Myrina, Magnesia , and Pygela.

Archaeological discoveries of burial sites of female warriors, in the Eurasian Steppes suggest that the horse cultures of Scythian, Sarmation, and Hittites likely inspired the Amazon myth.

In 2019, a grave with multiple generations of female Scythian warriors, armed and in golden headdresses, was found near Russia's Voronezh 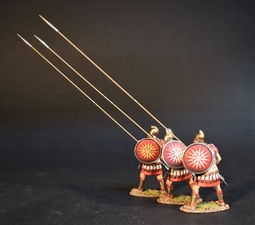 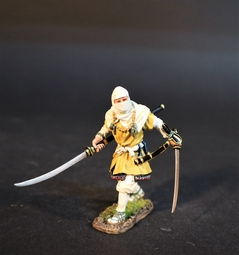 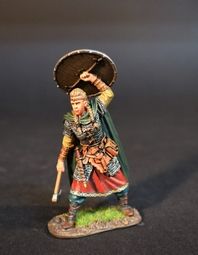 A shield -Maiden was a female warrior from Scandinavian folklore and mythology. They are often mentioned in Viking Sagas, and also in Germanic stories of the Goths, Cimbri and Marcomanni. The mythical Valkyries may have been based on such shield maidens.

There is little actual historical evidence for Viking female warriors, although there are graves of female settlers which have contained weapons.

The historical evidence that Viking Age women took part in warfare, are based on a Byzantine historian's records that women fought in battle when Sviatoslav I of Kiev attacked the Byzantines in Bulgaria in 971 AD.

In the Siege of Dorostolon, the Varangians suffered a devastating defeat. The victors were stunned to discover armed women among the fallen warriors.

The Saxo Grammaticus, reports that shield maidens fought on the side of Danes at the Battle of Bravellir in the year 750 AD

Examples of shield maidens mentioned by name in the Norse Sagas include Brynhildr in the Volsunga Saga.

The first of these, whose name was Hervor, was known to have taken up typically masculine roles early in her childhood and often raided travelers in the woods dressed as a man. Later in her life, she claimed the cursed sword "Tyrfing" from her father's burial site and became a seafaring raider. She was eventually to marry and settle down.

Her granddaughter was also named Hervor and commanded forces against the attacking Huns. Although the Saga remarks on her bravery, she was mortally wounded and dies on the battlefield. 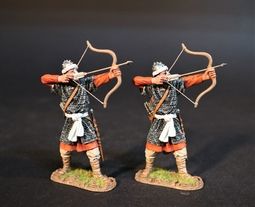 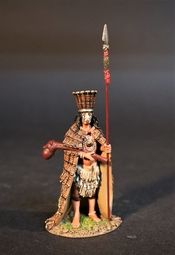 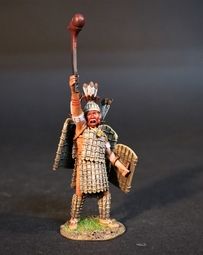 Starting in 1640, there was an intermittent war fought over one of the most in demand, luxurious items in the world: beaver pelts. The war was fought between the Iroquois Confederacy of the St. Lawrence River area and the Algonquian-speaking tribes of the Ohio Country and the Great Lakes, who were backed by the French. These wars took place in the Great Lakes region.

The Iroquois Confederacy was made up of five tribes that all spoke the Iroquois language: the Mohawk, Oneida, Onondaga, Cayuga and Seneca. These tribes were involved in the fur trade for over 200 years prior to the war. The Iroquois traded beaver pelts to British settlers and merchants. In return, the Iroquois received items that they depended on, such as tools and firearms.

Starting in 1640, there was an intermittent war fought over one of the most in demand, luxurious items in the world: beaver pelts. The war was fought between the Iroquois Confederacy of the St. Lawrence River area and the Algonquian-speaking tribes of the Ohio Country and the Great Lakes, who were backed by the French. These wars took place in the Great Lakes region.

The Iroquois Confederacy was made up of five tribes that all spoke the Iroquois language: the Mohawk, Oneida, Onondaga, Cayuga and Seneca. These tribes were involved in the fur trade for over 200 years prior to the war. The Iroquois traded beaver pelts to British settlers and merchants. In return, the Iroquois received items that they depended on, such as tools and firearms.

The wars and subsequent commercial trapping of beavers was devastating to the local beaver population. Trapping continued to spread across North America, extirpating or severely reducing populations across the continent. The natural ecosystems that came to rely on the beavers for dams, water and other vital needs were also devastated leading to ecological destruction, environmental change, and draught in certain areas. The beaver populations in North America would take centuries to recover in some areas, while others would never recover.

The King's Royal Regiment of New York was formed by exiled Loyalist leader, Sir John Johnson, from American refugees, fleeing persecution. On 19th May 1776, Sir John Johnson left his home at Johnson Hall in the Mohawk Valley and travelled with his family and approximately 200 retainers through the Adirondack Mountains to Montreal, Quebec. They arrived on the 15th June, just days after Governor Sir Guy Carleton's army recaptured the city.

Johnson soon left Montreal to chase the retreating Continental Army southwards down the Richelieu Valley towards Lake Champlain. He met Carleton at Fort Chambly where the Governor authorized Johnson to raise the King's Royal Regiment of New York.

Initially, the members of the regiment comprised Johnson's refugee retainers from his estates in the Mohawk Valley, but the steady stream of Loyalist refugees fleeing to Montreal provided a ready source of recruits for the King's Royal Yorkers. The Regiment served with distinction throughout the war, launching raids and relief missions into the Mohawk Valley of New York.

For the remainder of the Revolution, the King's Royal Yorkers formed an integral part of Canada's garrison. However, each year the regiment sent parties on raids into the Mohawk and neighbouring valleys for the purposes of rescuing beleaguered Loyalists and interfering with the ability of the Continental Army forces to use the region's crops as a source of food for Washington's army. These raids were generally launched from the Lake Champlain corridor or from Oswego, and caused a great deal of disruption. The militia of Northern New York never recovered from the disaster at Oriskany, and the region stood relatively defenseless.

In 1780, a large raid in to the Schoharie Valley led by Sir John Johnson gave rise to the destruction of large numbers of farms and pitched battles between the raiders and the demoralized American militia. 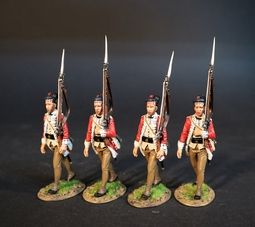 After service in the northern colonies, the regiment was sent south in December 1778. From that time forward all parts of the regiment were involved in most actions of the southern campaign. The 71st was to incorporate numerous colonial recruits, though the morale of the unit as a regular regiment was high.

The 1st Battalion under Major Archibald McArthur was assigned to Tarleton's command to pursue Daniel Morgan's Flying army until the clash at Cowpens. The only men to escape the Cowpens debacle were those few left guarding the baggage train in the rear. As a result of the defeat the regiment thereafter wore no uniform facings. The officers of the 71st petitioned Cornwallis that the regiment never again serve under Tarleton's command, and Cornwallis honoured the request.

The remnants of the 71st would fight on, and surrendered at Yorktown. 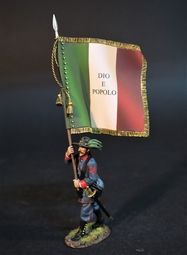 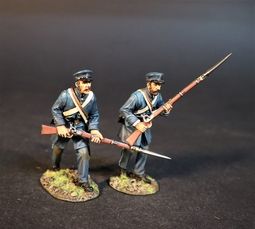 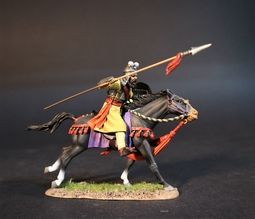 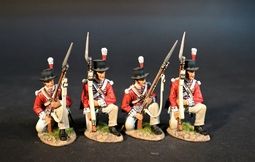 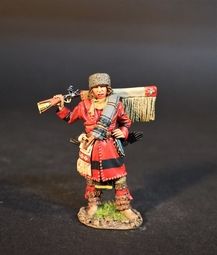