Welcome to the August 2022 announcements.

The July releases arrived and have been sent out.

For this set of announcements, we have lots of news. We have a brand new series based around the Gempei War in Japan plus additions to virtually all the ranges. 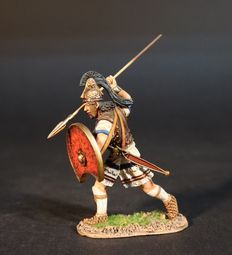 Acamas was an Athenian prince, the son of Theseus and Phaedra, and the brother of Demophon. He was the husband of Laodice (who was a daughter of Priam). Joined the war at a later date, but was a valiant member of the Greek force at Troy. Along with his brother Demophon, he was to rescue his grandmother Aethra during the sacking of Troy. 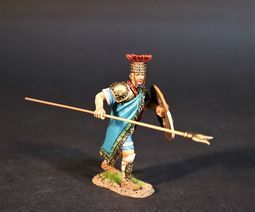 Glaucus, the son of Hippolochos, accompanied Sarpedon to Troy along with his troops from Xanthos. Himself a prominent warrior, Glaucus meets the Greek hero Diomedes on the battlefield, who is leading the Greek forces with the help of the goddess Athena. Glaucus and Diomedes exchange words and upon learning about each other's ancestry, the two warriors decide to not fight each other despite being on opposing sides. Coincidentally both their grandfathers shared a bond of friendship in the past. They continue the tradition of friendship by giving each other their own armour as a gift and part ways as friends.

After the death of Sarpedon, Glaucus, filled with anguish and sorrow over his fallen commander and cousin, reminds Hector of his duty to the Trojan allies. Fierce fighting breaks out around the body of Sarpedon as both sides aim to claim the body of the Lycian commander. Just as Trojans take the armour from his body, Apollo appears, accompanied by Hypnos and Thanatos, to cleanse the body and ease it back to Lycia. Glaucus follows in the steps of Sarpedon by leading the Lycian troops after his death 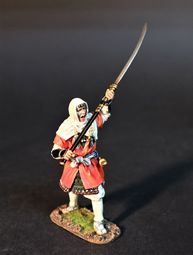 The Gempei War which took place between 1180 and 1185 was a national civil war between the Taira and Minamoto clans during the late Heian period of Japan. It resulted in the downfall of the Taira and the establishment of the Kamakura shogunate under Minamoto no Yoritomo, who appointed himself as Shogun in 1192, governing Japan as a military dictator from the eastern city of Kamakura.

The name Gempei or Genpei comes from the words Minamoto (Gen) and Taira (Hei, which was pronounced as pei)

These two families were fierce rivals, both were ancient families, descended from royalty.

The Heike or Taira had close ties with the court, and were well known as accomplished artists and men of letters as well as great warriors.

The Genji or Minamota were rustics, and each side derided the other for their chosen lifestyles.

Conquest of America - SKRAELINGS, THE BEOTHUK 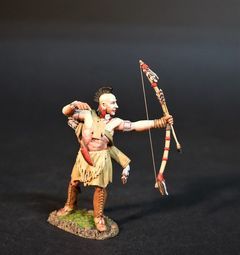 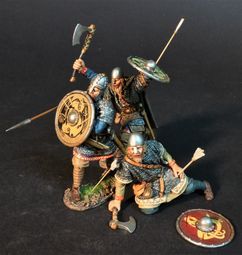 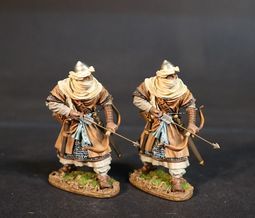 PLEASE NOTE THESE WILL BE THE LAST RELEASES OF THE ALMORAVIDS. 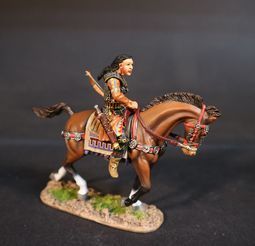 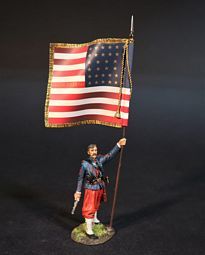 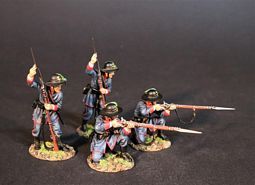 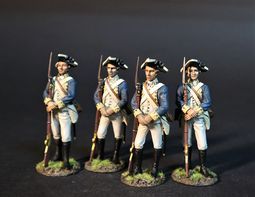 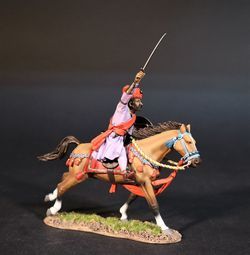 A Travois is a frame structure that was used by the plains Indians of North America, to drag loads over land. There is evidence to support that travois were used in other parts of the world before the invention of the wheel.

Initially the travois was pulled by dogs. The basic dog travois consisted of two aspen or cottonwood poles, notched and lashed together at one end with buffalo sinew, with the other ends splayed apart.

Cross bars are lashed between the poles near the splayed ends, and the finished frame looks like a large letter A with extra cross bars.

The apex of the A, wrapped in buffalo skin to prevent friction burns, rests on the dog's shoulders, whilst the splayed ends drag over the ground.

Women both built the travois and managed the dogs. Buffalo meat and firewood were typical travois loads.

Although the dog travois were small, they were capable of pulling up to 20-30kg. In hot weather travel was slower as it was more tiring for the dogs. Dog travois can be seen in the paintings of Karl Bodmer.

By the mid 18 th Century, the dog travois had given way to the horse travois. When dogs were replaced by horse, the greater pulling power allowed trips to increase in size and household goods to multiply.

Instead of specially constructed sleds, the plains Indian tribes would simply cross a pair of tepee poles, across the back of the horse, and attach a burden platform between the poles behind the horse. This served two purposes at once, as the horses could then simultaneously carry the tepee poles and some additional baggage. Children often were able to ride in the back of the horse travois.

Some tribes it was also traditional to leave the tepee poles behind at the old camp, for use by the next tribe or family to camp there.